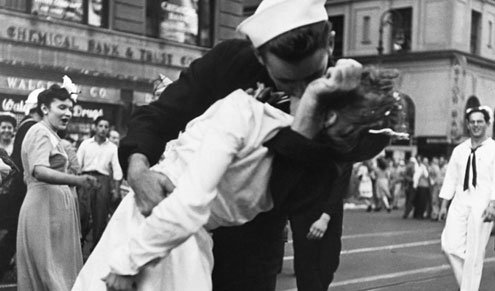 #8220;Fine, you can have a turn. Spin it.” I didn’t know what I was doing. I had just happened upon my older sister Kim and her friends behind our apartment building playing with a Coke bottle. Wanting to be a part of whatever was going on with the older kids I had pushed my way into their circle, much to the dismay and embarrassment of Kim.

“Go Jenny,” Kim commanded while rolling her eyes at me.

I spun the bottle as hard as I could. I liked the sound the glass made while wobbling on the concrete. When it finally slowed to a stop the neck pointed at a boy named Scott. He was a scrawny kid like me, but with white blonde hair and big brown eyes. He looked around the group, unsure of what to do or say. I thought that was it; my turn was over, the game was stupid and I was about to get up and leave.

“Well, kiss him.” Pricilla snickered while pointing at Scott. I didn’t like her. I didn’t like her name or all the pink she wore. As a tomboy who had never even considered kissing a boy, I looked to my sister for help. But she gave me none. She just stared at me angrily while silently daring me to do it. Or so I felt. I looked at the rest of them and took a deep breath.

“Fuck off” I said slowly and defiantly, while staring at poor Scott’s big brown eyes. I had never said those words out loud before, but I didn’t blink.

Scott’s eyes widened and his mouth dropped open and the group was frozen. Again, I looked to my sister. Kim’s eyes narrowed and a slight smirk came to her face, just before she whispered the words, “I’m going to tell Dad,” and got up to run home. I got up to chase her, leaving Scott and the rest in the wake of my expletive. As I ran I planned my defense to my father.

Such was my introduction to kissing — and profanity.

Four years later I finally did kiss a boy. He was a pudgy, blue eyed, brown haired boy named Jason. I chose him because he was nice and I knew he wouldn’t try to stick his tongue in my mouth like the other boys did to my friends. I was right about him. As we stood around the corner from the lockers he kissed me gently on the lips while we both tried to hide our trembling hands in our sweatshirt pockets.

Since Jason, I’ve kissed my fair share of boys (and a few men) and have concluded the obvious: the kiss is pretty darn powerful. Kisses have made me feel excited, frightened, overwhelmed, empty, loved, surprised, and disappointed. Once, a simple kiss made me think butterflies were literally taking flight inside me. Our lips are quite possibly our most potent little body part. “A kiss may ruin a human life,” wrote Oscar Wilde. In Margaret Mitchell’s “Gone With The Wind,” Rhett Butler warns Scarlet O’Hara, “I will make you faint,” just before passionately kissing her. How many woman wished to have a kiss from the likes of Rhett and how many men wished to have a women respond to their kisses the way Scarlet did with Rhett?

After some time pondering kisses, I wondered why I’d never kept a simple kiss journal over the years. Especially having realized that with each of my relationships, be they a few weeks or 18 years, my kisses, given and received, changed considerably with moods, emotions — and with the loss of emotions. I began asking friends about their own kissing history and experiences. I’m no Gallup poll, but the men and women I chatted with unanimously agreed that a kiss changes with each partner, depending on feelings and emotions. It’s hard to hide your feeling for someone from your lips.

For those of you who keep a journal, why not add a kissing journal, a logbook of each kiss you’ve ever had with three words to describe them? Jog your memories. I challenge you. Create a kiss journal and see what it tells you.

In case you were wondering, I never did get in trouble for standing up Scott and the rest of the group. When I got home my sister was nowhere to be found and my parents were casually drinking coffee at the kitchen table. Kim must’ve figured out that if she told on me, she’d also be telling on herself. No matter how angry she was at her pesky little sister for interrupting the kissing game, sacrificing me wasn’t worth the trouble she’d have had. Smart girl.