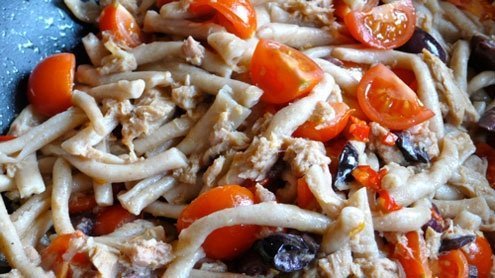 Doing research in the African wilds can put tuna pasta at arm's length — unless you make an effort.
T

here was a time in my life when I saw a man smear Limburger cheese on a calf. Not on the back of calf’s leg, mind you. No, he was smearing stinky cheese all over a young cow. Alive. It was a scientific experiment.

The man is now my husband.

At the time we were living in a village called Muheza, in northeast Tanzania a few hours south of Mombassa. A few years later — and fittingly enough given his unorthodox pedigree — my husband was awarded an IgNobel for his work in malaria mosquito research. In case you wondered, the subject of his paper was how one kind of female malaria mosquito “is attracted equally to the smell of limburger cheese and to the smell of human feet.”

Our neighbor at the field station, Dorothy, had a bush baby as a pet. She furnished a room in her house with tree branches so he (she?) could play. Inexplicably, the bush baby escaped one night. Dorothy asked us every day if we’d seen him, but sadly he never returned.

Another guy, Derek slept in a tent with a pig. Of course, that was also part of a malaria mosquito experiment. Derek was quite good looking in an Indiana Jones sort of way, with his leather hat and dogtooth necklace. My guess was that the pig was happier than the calf, very possibly not the result of Derek’s looks but of not having to endure stinky cheese.

My lovely friend Tharani, a pharmacologist from London, kept me sane by giving me novels and talking about chic clothes. She also made me my first-ever pear crumble using Blue Band, the mysterious African margarine that the sun won’t melt. Given the lack of good ingredients, it tasted superb.

It’s funny how that summer spent in a tiny and remote village in Africa felt so uneventful to us. Very much like this June on our emerald mountain in Umbria. Nothing really happens. It’s beautiful all around. We take care of our chores and try to keep out of trouble. People come and go. Some are odd but most are wonderful.

One difference between Tanzania and Italy is that in Africa we were always starved for good food. Our less-than-brilliant cook subjected us to banana sandwich, rice and overcooked chicken day in and out.

One evening we “occupied” the field station cooking facilities and made spaghetti for an eminent visiting scientist. We managed to scrounge up a tin of olive oil, some tuna and a package of Neapolitan pasta (part of an escapade to the nearest town.)

I still see my guests around the table, so excited awaiting the Italian extravaganza to come. But when I dropped the spaghetti in the water, melted into small pieces. The pasta must have been too old or fake or both.

But we couldn’t just go to the store to fetch something else. There were no stores, let alone restaurants. So we fished out the soupy noodles and ate them with the tuna sauce — and cheered when we did. We laughed at the eminent scientist’s incomprehensible jokes, and polished every particle of the fabulous Blue Band crumble. It was a magical night.

Many years later it’s still a staple in our home: pasta with canned tuna, olive oil and a handful of whatever’s one hand, maybe tomatoes, olives, or capers, armed with the determination to make the best of it, to do what you can with what life has to offer particularly when the alternatives seem out of sight.

— Using a shallow pan (one with high sides is ideal), sauté the garlic in two tablespoons of olive oil over very low heat. Do not brown the garlic. You only want to flavor the oil.

— Add the tuna chunks and stir until just warm. Add olives (or capers). Increase the heat; add tomatoes and sauté quickly until warmed through. They should not cook and lose their shape.

— Sprinkle with a pinch of sugar, add chili pepper if using, and turn off the heat. The whole preparation shouldn’t take more than five minutes.

— Meanwhile cook the pasta according to package instructions. The sauce is light and relatively dry, suitable for spaghetti or short pasta shapes like strozzapreti. It doesn’t go well with fettuccine or similarly thin, flat noodles.

— Stir again until the excess liquid is absorbed. Sprinkle with parsley and drizzle with fruity extra virgin olive oil. Serve on warm plates at once.

With whatever energy you might have left, find the bush baby.