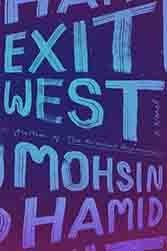 Trap doors and mysterious chambers opening into surprising realms have long played an important role in fantasy fiction. Lately, authors have found little use for them. Pakistani-born Mohsin Hamid changes that. His “Exit West,” at once a love story and a migration parable, depends entirely on the existence of such fantastic passageways. In an imagined Eastern city slowly being enveloped by civil war — there are hints of Tehran, 1970s Beirut, today’s Damascus and even Hamid’s native Lahore — a devout young man, Saeed, meets bold, emancipated Nadia, black-robed by choice, and the two fall in love — a love that can’t be consummated until marriage because of Saeed’s never-articulated religious beliefs.

But the local conflict deepens into barbarism and the young “lovers” seek a way out, which they find through a door, one of many secret passageways (in homes, in restaurants, in construction sites) known only to insiders. Enter a dim portal and in the dreamy blink you exit West, to Mykonos, to London (soon a city where “native-born residents are vanishingly few”), to California’s suddenly migrant-swelled and “overwhelmingly poor” Marin County. All at once the West is awash in refugees, carriers of both hope and heartbreak. They no longer need to traverse deserts or oceans. They need only find a connoisseur of doors. Westerns cities are besieged, outraged, and awash in “nativist” resistance, often brutal. The world is now flat and all must cope with the realities of global dislocation and vast shanties as a matter of course.

In a time of massive emigration, and one of resentment to it in many quarters, Hamid has found a way to address the issue by tapping the mystical. His traveling companions must face more violence and deprivation, but at least they’ve made it out into a world that’s increasingly less able to insist on the defining sanctity of national states. He portrays a planet that’s destined to change whether it likes it or not, hence the conceit of the doors, which “cannot be closed” — thus bypassing walls and the blocking conventions of governments. All can be left behind, geography subverted. All can be started anew, and more than once, human camaraderie foremost. Saeed and Nadia are brave new travelers on a planet, agrarian at the core, that hasn’t yet dawned and terrifies the many, but whose post-political geography Hamid treats as inevitable (“the apocalypse appeared to have arrived and yet it was not apocalyptic, which is to say that while the changes were jarring they were not the end, and life went on…”)

The personal and cultural vicissitudes of the love story may matter less than that the passionately humane message just below the surface, as if to say “Where there’s a will there’s also a passageway,” and such passageways, once discovered, or transformed from metaphor into reality, will render all barriers moot. “Everyone migrates,” writes Hamid, “even if we stay in the same houses our whole lives, because we can’t help it. We are all migrants through time.” Hamid knows. He has lived and worked in London, New York and California. His compassionately rendered, Philip Dick-style fable proves his global conviction.