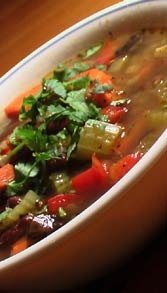 man in a flamboyant crepe chef’s hat topped with an explosion of streamers took the mike and spoke calmly: “Tre, due, uno. Assaggiate le zuppe!” Thus began the Second Annual International Festival of Zuppa in San Paolo, a neighborhood on Rome’s south side.

For me, the adventure had started hours before as I sat in front of my ingredients, trying to decide how to go about making soup. I knew what I had in mind. I had bought spelt, dried porcini mushrooms, and speck. Now I sat looking at the world blurrily through tired, Sunday-morning eyes and contemplated things that hadn’t occurred to me when first signed up for this soup contest/public soup tasting.

3. I was going on foot to the festival carrying the soup the whole way.

4. I was competing against old Italian ladies, the undeniable masters of soup.

Two hours later my roommate got home with a friend and they found me sitting in the kitchen, smoking a cigarette, and watching my soup boil and froth.

“What are you making?” I am trying to make soup.

My roommate tasted the soup and recommended pepper. But we’d been out of pepper for over a month. A while later I arbitrarily decided that the soup was done.

It was 2:28 p.m. and I had a 2:30 appointment with a friend at the festival. Based on the Roman time system, that meant I needed to get ready. While I was in the shower the phone rang in the kitchen and my roommate answered. “Julianne,” she yelled, “you need a name for your soup. And decorations for your booth… and a costume for yourself… and you need to put some in a jar for the judges… and you need to be there in like 10 minutes.”

My blurry eyes relieved by the shower, I lifted the lid and re-examined my soup. It was beautiful. No, it was a masterpiece. Now, I needed a name for my precious, lovely, tasty soup. “A Speck of Fun Guys”….. no. “Don’t Cry Over Spelt Soup”… no.

I put together my booth decorations while pondering the name.

I poured some soup into a jar and continued to think of a name. I looked for a perfectly fitting pot cover but didn’t find one. Then it hit me: “Existential Soup.”

Jar in my backpack (along with the decorations), I put on my cape, oven mitts, got a good grip on the scalding pot, and toddled off to the festival, soup in tow.

I found some 300 people milling around when I got there. I had to register my soup and sign an affidavit saying I’d hadn’t included any illegal or harmful substances.

Finally, I was at my booth with paper bowl and wooden spoon. To my right was a family that had made chocolate soup and sugar cookies. Two college boys approached me, ready to pounce (on the soup). “Assaggiate le zuppe,” proclaimed the judge.

People came by, read my ingredients, oohed and ahhed, tasted it, oohed and ahhed again. In 20 minutes, the gallon I’d made was gone. One man walked up, removed the lid, and finding it empty said, “Ah, that is existential.”

I saw the extravagant crepe hats of the judges bobbing toward me just before I left. Why, they asked, was my soup existential? An inappropriate question, I replied. They left, pensive.

They were followed by girl dressed as a pig and her macellaio-boyfriend. They wanted to know if my soup would take them places? That was the kind of question my existential soup liked. My roommate came around with samples. My favorite was Chickpea ice cream soup.

I didn’t win. I did think of how strange Rome can be. I also thought of Kierkegaard, who had he tried my soup would surely have said: “The thing is to find a soup which is true for me, to find the soup for which I can live and die… and that is what I now recognize as the most important thing…”

What Kierkegaard had in mind, I believe, was about truth, not soup. We are all looking for something, he said, something that is missing. Our soup-truth. We look for it everywhere, in a partner, in hobbies, jobs, drugs, books. I once actually lifted the rug in hopes that my soup-truth was there. It wasn’t. I later found it in smile behind the hand that ladled the soup.

“You wasted a warm Sunday morning on making mediocre soup for strangers?” my friend chided me on Monday. His view of my waste was my time dedicated to learning, sharing, communing, creating, laughing.

What’s the value of your life? It’s what you put in your life shop. You decide what to stock. You decide the price tags. “Existential soup” may be cheap elsewhere but in my store it’s priceless. If want a bargain, feel free to check out the aisle with “Loud club scenes.” Those I’m practically giving away.