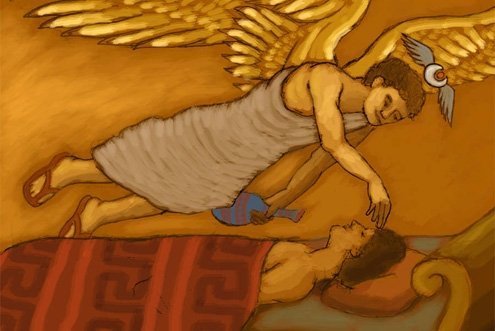 Where's Hypnos when you need him?
I

n June 1928, Amelia Earhart flew across the Atlantic Ocean, becoming the first woman to do so. She later confided she saw herself as an extra on her own flight, “just baggage, like a sack of potatoes.” “Maybe someday,” she quipped, “I’ll try it alone.”

Fortunately for women explorers, she did, and succeeded.

The night before leaving Europe I hadn’t slept more than two hours. Anxiety (“Will I the alarm clock wake me?” and “What if I miss my flight?”) kept Hypnos, the Greek god of sleep, at arm’s length. Hypnos tends to abandon or elude me when I need him the most. He’s like an emotionally unavailable boyfriend who’s around when all’s well but disappears at the first sign of stress.

No thanks to the Greek, I woke to the alarm, downed a cup of coffee, grabbed a cab and made my Newark-bound flight. Dazed and confused, I told myself I’d sleep on the way. That didn’t happen.

Unfortunately, as much as I travel, I rarely sleep on airplanes. I just can’t get the hang of sleeping upright. It seems unnatural. I need someone or something soft to lean on. I had neither. Though I had a window seat, it refused to recline. Not only did it not recline, it pushed my upper body slightly forward since the headrest/seat wasn’t made for smaller people like me. So, for nearly nine hours, with dry eyes, a stiff neck, and foggy brain, I read, wrote notes in my journal, watched a movie and otherwise stared off into space, periodically cursing the aforementioned Greek god.

No sooner in Newark than I got a text message from the airline informing me my flight to Seattle had been delayed. My two-and-a-half hour layover was now six hours.

I felt ready to crumple on the cold airport floor — and Newark isn’t the best place to sit for six hours, let alone rest. Not that I could anyway. I worried that if by chance I did fall asleep, my bags wouldn’t be there with me when I woke.

After my U.S. Customs interrogation I made my way to the next check-in counter, at which point another wave of exhaustion rolled in, this one accompanied by slight pounding in my head. I considered checking into a hotel for the night and leaving early the next day, but I didn’t want to spend the money or risk another night of anxiety-ridden “Will I wake to the alarm?” sleep.

I’ve had my fair share of exhaustive days, but this one was different. No sleep the previous night followed by a 24-hour travel day had pushed me to critical mass. What can I say: I’m a sleep wimp.

When my Seattle-bound flight finally left I was wedged between two rather large men. I had six more upright hours ahead of me. So I did something I’d never done before, something that’s always been hard for me to do. I asked a stranger for help.

It was an innocent enough request. I just needed a shoulder to lean on, literally. He wore all black, including black glasses and a fedora that rested gingerly on his round, shaven head. He — John — told me he was a musician, a piano player, and that he’d spent much of his life traveling, playing the clubs around the country. He smelled clean, spoke softly and had kind eyes. John would become my pillow, the stranger I’d trust.

I’ve always thought sleeping beside someone, touching them, is an intimate experience. More so than having sex, because when you’re asleep you’re utterly vulnerable. Sleeping together — and I mean sleeping — requires trusting your partner.

Two hours into the flight, and what felt like the thousandth time trying to sleep with my neck just so, I gave up. I couldn’t stop it. My head just sort of found his shoulder. I woke immediately and apologized for my airplane faux pas.

“Oh, please,” said John. “It’s a good shoulder with lots of room. Not a problem at all.”

“Do you mind if I rest it again? I’m just so tired and I can’t sleep.”

“Of course. Go right ahead.”

And so, with my head on his shoulder, our heads eventually finding each other’s, we crossed the continent. John and I slept peacefully and intimately for a few hours, my anxieties temporarily sated thanks to kindness of a stranger and, finally, a serious visit from Hypnos.