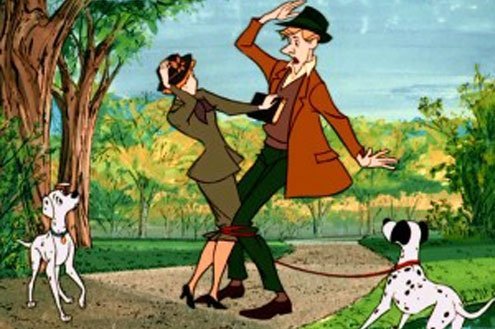 Roger and Anita... a cautionary tale.
I

t happened again last week. Bella and I were enjoying a calm, uncrowded bus ride home after spending the day together. As if often the case on Roman buses, the few standing passengers had claimed their spots in front of the door, their solid poses reminiscent of Imperial-era portraiture.

When the time came, getting out turned into an adventure. Along with other exiting passengers, I had to perform something like a pseudo-basketball pick-and-roll. While shouting “permesso,” or “excuse me,” I fell over Bella but luckily managed to grab hold of a pole, avoiding a nosedive into a granny.

In my head, I worked the pole like Demi Moore in “Striptease”; in reality, I’d made a cumbersome save, which prompted the granny to say, “E vedi che l’hai fatto male.” She meant I’d hurt my dog.

At least once a week, my uncoordinated life replays one scene:

I’m somewhere with Bella (leashed or free), I step forward and suddenly find myself lunging into a void. Bella yelps in anguish while I do my best not to hurt her. We sulk and limp for the next 10 minutes or until I get over the fact that I have just tripped over my dog… again.

Unbeknownst to many, having a small pet is quite risky. The opening scene of Disney’s “101 Dalmatians” romanticizes dog collisions (when Roger and Anita meet), but with small dogs and other animals, these kinds of mishaps can be unpleasant and truly heart-wrenching.

No matter how cute and docile small animals may be, they easily get underfoot. To avoid injuring them, we often times cause worse harm to ourselves.

According to a recent article in The New York Times, “small dogs and cats are responsible for more than 86,000 falls requiring emergency room care each year.”

Disney must have cut the scene where Anita accidentally tripped over one of the Dalmatian puppies and broke her wrist (while trying to avoid crushing the puppy and ramming into Roger’s piano).

After I read the article, I wondered if every time I’m near Bella I’m actually putting my own life at risk. I began to replay our spills. Most happened in cramped spaces (my kitchen, in particular) and almost inevitably when I was rushing to do something or get somewhere.

Luckily, Bella has been more bothered than harmed. The only real damage has been psychological and financial. I live in fear of hearing Bella yelp. As a result I’ve bankrupted myself buying dog-gifts. They’re my way of saying, “Excuse me.”