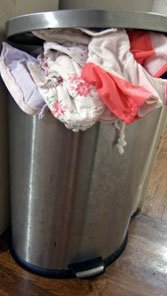 Chriminy I could use a drink!
H

igh-risk pregnancy brings with it connotations of danger. But nothing’s as dangerous as a “bed rest” sentence with 24-hour access to the information superhighway.

Living every day with the little search engine that could gives you ample opportunity to surf for every possible pregnancy pericolo, which is Worst Case Scenario city. I know of what I speak. Unfortunately.

But after about two weeks of pre-partum mayhem, I decided to nip my negative obsession in the bud and focus on better topics. Which made things really dangerous. I stumbled on an article on the evils of the multi billion-dollar business of disposable diapers. That was a week ago.

DISCLAIMER: I shave my armpits and do not own a pair of Birkenstocks. My hair is not in dreads and I do not smoke or wear hemp.

At the very same time I found the diaper article, my husband Marco sent me one on the benefits of cloth diapers. I didn’t open the link. Instead, I went back to the bedroom from the couch. (That’s right people. We email each other from the same apartment. We are queer like that.)

“Do you know how much laundry I would have to do?” I barked.

“Okay, it was an idea.” He backed down immediately.

I said nothing. Instead, I stewed and brewed. I then resumed my position on the couch — and opened the link. The cloth article led to another, and another. My mind was a flutter and my conscience felt guilty for ever having covered my firstborn’s posterior in anything other than reusable materials. I walked back to the bedroom.

“Did you know that every disposable diaper takes up to 500 years to biodegrade?” I asked incredulously.

“Yes!” replied Marco. “And that in the U.S, 27.4 billion diapers are disposed of per year. That doesn’t even count the OO-rope-ah.” (Europe.)

Things were getting intense.

Me: “And that the feces in the landfills is polluting groundwater. Not to mention that 100,000 tons of plastic and 800,000 tons of paper pulp are wasted.”

Marco: “And that we spend over 1800 euro a year on the PAM-per?” Always about the Benjamins for Marco.

Me: “And dioxin is on the FDA list of carcinogens.”

We had reached a crescendo and stared at each other.

Marco: “Saving that money every year we could take an extra vacation.”

I marched out of the room and emailed a friend of my younger sister. She was the only person on the planet I knew who had used cloth diapers. Previously, I had made many a sarcastic comment about her human waste removal practices; now I was seeking counsel.

“Cloth diapers aren’t what they used to be,” Kelly told me. “Initially we used a diaper service, which was still cheaper than buying disposables… then we switched to all-in-ones.” There was even reusable diaper lingo to learn! Kelly was honest in saying that cleaning up excrement everyday wasn’t the greatest gig but that “once you get used to it…it’s not a big deal.”

I continued my mad research discovering the difference between “pocket diapers,” “Chinese folds” and “doublers.” I had entered into a world from which there was no turning back. An hour later I had an invoice in my inbox and a starter kit of reusable diapers en route to my address. I had made the leap. I would change my soon-to-be second son with micro-fiber diapers and at the same time change the world! I would save money, the environment and my new baby’s ass from carcinogens. And what’s more… my firstborn would no longer be the sacrificial lamb of the disposable industry — we would start using these things immediately. I had a new cause… a mission… a passion.

While waiting for the products I called my inner circle to inform them of my crusade and infuse them with some of my enthusiasm. I received accolades from two sisters and an “Are you freaking crazy?” from another. Two friends are still milling over the choice.

Another girlfriend — who knows Sarah Jessica Parker’s soon to be new nanny — was so affected by my preaching that she’s trying to convince the nanny to get on the reusable bandwagon so we can stir up positive press for these eco-friendly nappies.

I felt a surge of power! Or maybe it was just another Braxton Hicks contraction! Regardless, I was making a difference without ever leaving my couch.

When my shipment arrived, it seemed as if I were not only receiving a gift but giving one as well. I felt so good about my green choice on so many levels. It felt so… right. It only added to my glee that the diapers were totally cute with fancy snaps and Velcro strips — adjustable for any child from 4-to-14 kilos. Hip hip hooray! After washing the diapers three times in baking soda and vinegar (once again, very ecological — yay me!) they were ready for Oedi.

“These will be the perfect transitional pants for him,” I said keeping in mind my potty training goals. I was sure these goods would be more wet and thus uncomfortable than disposables. Turns out, I was wrong. The darned things have advanced so much since the folded and pinned kind that they’re every bit as absorbent as the dioxin filled diapers. Unaffected, Oedi went on doing his business in his new fancy pants. Ew.

After 24 hours I had cleaned and laundered my first batch of nappies. I called my younger sister.

“Turns out,” I said. “Cleaning out crappy diapers is not as much fun as I had hoped.”

“But it is the right thing to do. Right?”

“Yes it is. But you might be making your carbon footprint bigger with the laundry.” Huh? Did she have my back or not? I changed the subject.

“I get to win mother of the year next year!” Toot toot. I had to give myself some mad props.

Forty-eight hours later I was settling into the green groove. Seventy-two hours and we hit a snafu: teething diarrhea. “Chriminy, I could use a drink!” I said breathing through my mouth and wondering how my super sensitive pregnant sniffer functioned so well with chronic sinusitis.

Four days later, Kelly was right. Once you get used to it, it isn’t so bad. Plus, it helps knowing you’re doing your part for the planet. And as soon as I can get off bed rest… I am going to buy the most expensive pair of shoes me and my carbon footprint can find. After all, I’ve earned it.