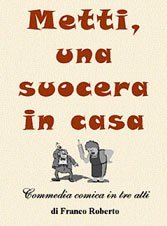 Not quite as planned...
I

f there is a spring in my step and a song in my heart these days, it could have something to do with the fact that my mother-in-law has just left after one of her five-day sojourns. I realize that this is unlikely to endear me to many people, least of all to any Italian mothers-in-law who happen to read English. But my own suocera — such an ugly word — is not just Italian; she’s from Naples, and as anyone who has one will know, they are a breed apart.

Friends have learned to gauge what phase of the visit is in progress from my mood. On day one, I am still upbeat and positive, determined not to repeat the mistakes of before as she arrives, dressed to kill and fresh from the hairdresser, laden with presents for the children. My good intentions receive their first setback as the terrible transformation takes place. Off comes the silk blouse and on goes the shapeless shift and the flip-floppy slippers. Then comes the worst part, as the hair curlers go in and she grabs a broom to begin her relentless sweeping, under my feet as I’m trying to write an article, dusting my desk as I’m trying to do a phone interview.

Next, it’s into the kitchen where the fridge and freezer are methodically emptied, and every last scrap of food is cooked or processed as though she is stocking up for World War III. Now I’m not a particularly house-proud person, but even I can’t help noticing that the walls of the kitchen are covered in a patina of olive oil and tomato sauce as the assault progresses. My favorite olive wood salad spoons are plunged into simmering vats of genovese pasta sauce, and left until they are dry and brittle.

When I go to the bathroom, it’s hard to ignore the fact that my hairbrush has different colored hairs in it, and that my toothbrush has been used by someone else. By day two my resolve is beginning to falter, and by day three, it’s time to escape with a friend to watch a movie at Rome’s English-language Pasquino. Goodness knows what I’ll do now that we have moved to Spoleto, where the cinema only appears to open on Fridays.

The lowest ebb in our relationship came soon after I was married, when my mother-in-law insisted on stripping our bed in some form of archaic post-nuptial rite. I blew a fuse, even though it was only day two. We had another run-in more recently, after she confessed to an English friend of mine, that she wished her daughter-in-law was “different”. Of course, I know just what she meant. She’d like someone to go shopping with her and to swap gynecological stories. Instead, she got someone who doesn’t dress her grandchildren warmly enough.

But strangely enough, that argument, which at the time caused tears and fireworks, seems to have served a purpose. We now have a modus vivendi based on an understanding of the boundaries that cannot be crossed and a degree of mutual respect. It’s hard not to admire a person who lives with great dignity on a miserly pension, in spite of Berlusconi’s promises. She can cook a banquet with next to nothing. And it’s difficult not to be dazzled by the way she transforms herself back into a glamour queen when it’s time to go out — though by day four my abilities to be impressed are waning fast, as she waltzes out of the door in a cloud of hairspray.

But what I really love about my mother-in-law is her canny street-wise way, which comes of being brought up in Naples during a war which was all too real, when only the sharpest and the fastest went to bed with food in their stomachs. She had all of us crying with laughter the other night as she told how she and her twin sister recently joined a queue outside a store selling toasters at knockdown prices. It soon became clear that there was only one toaster left, and the man in front was looking intently at a picture of it in a catalogue. The 73-year-old sisters sprang into action. One got her umbrella, and jabbed the man between the legs to create what she later described as a “diversion”. As the hapless man doubled up in agony, sister number one — my own indomitable mother-in-law — ruthlessly pushed in front to claim her trophy. They don’t make them like that any more.