Everything is the Best Thing Ever 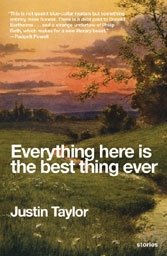 Justin Taylor’s 15 debut stories are a postmodernist scaffold erected by an expert carpenter. Characters called Tim, Rusty and Melanie coexist with those called Snapcase and Riot. All are between 20 and 30 and parked in rural, urban and relationship settings that lack purpose and theme (“Class of 2000… one for each zero.”)

Though Taylor is an excellent purveyor of post-adolescent absentia, the result is both gift and curse. In “Tennessee,” a Jewish family transplanted to the hinterlands has a bad brother called Rusty and a father who doesn’t know Noam Chomsky is a Jew. In “The New Life,” high school love gone wrong leads to witchcraft gone awry. In the one-page “Finding Myself” (Taylor’s best stories are his ultra-shorts), the narrator berates himself for “the punitive fact that I am not a casual observer.”

Taylor is anything but casual. He’s also excellent at portraying the dim acres of hook-up sex (“That’s what you wanted, right?”) But lost-ness has its limits. “The future is what you submit to,” says another of his disenchanted. Despite the detailed tenderness Taylor brings to bear on “commodified,” “fallen world” youth, the stunted can’t grow. That’s Taylor’s point, of course, but as a result the needle stays in the same groove.

“It’s what goes unsaid between people that gets built up like masonry,” says Todd in the “A house in our arms,” about sexual predilections as endless appetizers without main course. For Taylor’s fallen adult-children, all the masonry is cheap. See one dump and you’ve seen them all.