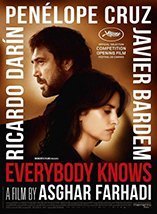 Iranian director Asghar Farhadi, who made “A Separation” in 2011, and “The Salesman” in 2016, both of which won the Best Foreign Language Film at the Oscars, is well-known among filmgoers for intimate portraits of people under stress and in crisis, struggling with moral dilemmas that allow no easy resolution. There’s some of that in “Everybody Knows,” but to get to it one has to go through a classic whodunit, along the lines of a game of “Clue” or Agatha Christie’s “Murder on the Orient Express.”

Titled “Todos lo saben” in its original Spanish, the film is Farhadi’s first outside of Iran. It’s set in a Spanish wine-country village where locals and out-of-towners have gathered for a family wedding. Among the guests are Laura (Penélope Cruz), who has made the journey from Argentina, leaving her unemployed husband Alejandro (Ricardo Darín) behind, and Paco (Javier Bardem), now married and owner and operator of the local winery. Laura and Paco have a past; they grew up together on the estate–she as the daughter of the proprietor, he as the son of hired help. Then there’s Irene (Carla Campra), Laura’s flirtatious and thrill-seeking teenage daughter.

A dozen other characters clutter the screen, providing possible perpetrators of the crime as well as bodies for a lively post-nuptial celebration. That’s where the whodunit comes in. During a downpour and a blackout, Irene goes missing, and it’s soon clear she’s been kidnapped. While Laura goes to pieces (too often, and in too many scenes), Paco throws himself (perhaps too energetically) into the hunt for Irene and her kidnappers. He’s later joined in the investigative work by Jorge (José Ángel Egido), a retired, Columbo-style policeman, who asks some detective-like questions, eventually arriving at the film’s title. But what is it that everybody knows? (Or that “nobody knows,” the film’s original title)?

It has something to do with Laura and Alejandro, who comes in from Argentina and thinks God will save his child, and especially with Paco, who is at the center of the ethical issues that emerge. Because no one else has any money or property, Paco, once of the servant class, must decide if he will sell his vineyard to pay off the kidnappers’ ransom, a decision that would leave him penniless, land-less, and wife-less. His decision becomes even more complex, as we find out that not everyone believes he came to own the vineyard legitimately, and as we learn what “everybody knows.” And that’s the genius of Farhadi.

“Everybody Knows” is Farhadi “lite”: accessible and entertaining, but also oddly traditional in its narrative, coming up short on the ethical conundrums that have made this director exceptional.