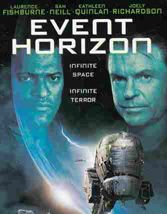 An “Alien” derivative by “Resident Evil” director Paul W.S. Anderson. In 2047, a rescue craft called the “Lewis and Clark” tracks down the “Event Horizon” — great name! — a research vessel with a time-travel drive that disappeared near Neptune seven years before. The crew is very dead. What happened aboard the “Event Horizon” during its seven-years AWOL? Rescue ship leaders Sam Neil (Dr. Weir) and Laurence Fishburne (Captain Miller) leaven a weak script with blue collar charisma and Anderson kicks in some mesmerizing visuals. The rest is mostly pro-forma terror born of Black Holes and wearily engineered dread.