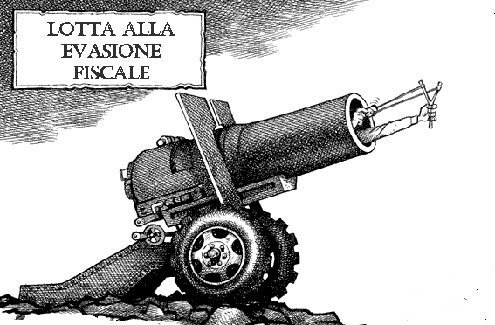 Tax evasion has long been a way of life.
I

n Italy, it’s all about the loopholes. You can call this what you like: Corrupt. Creative. Sleazy.

For many living here, it’s seen as none of the above. Instead, it’s simply necessary. After all, they point out, Italy is a country where income taxes alone start at 18 percent and spiral upwards to 45 percent.

It’s a place where transferring property means involving a notaio, or notary public, to whom you pay a minimum of some €1,300 for witnessing the contract signing; where an employer can expect to pay wages to an employee, and then a third again in taxes on that employee’s behalf; where buying a restaurant license costs some €300,000 (if you can get one, since there’s a hold on awarding them in “saturated” cities like Rome).

It’s hardly surprising that so many Italians, already distrustful of their government and gun-shy of nationalism, have figured out other ways around it all. Stores and doctor’s offices post signs offering discounts for cash payments. Waiter after waiter writes receipts on napkins or slips of paper, rather than the official form required by (and copied to) the government for tax purposes. Landlords give tenants cheaper rates if they don’t need a legal, registered contract, which would mean paying a tax of up to some 40 percent.

Even the leader of the country is not only on trial for tax fraud, but also has said he understands the motivation to evade taxes. “If taxes are as high as 50 or 60 percent, then it seems too much, and you feel somewhat justified to elude or sometimes evade,” he told the Italian builders association in 2008. And while most Italians seem to find Silvio Berlusconi a bit of a buffoon, they also seem to tolerate and understand, at least, the fact that he uses the assets he has (namely: money and power) to meet his goals (more money, more power).

The result: A black market economy that makes up nearly 20 percent of the country’s GDP, and that’s by government estimates. Tax evasion so pervasive that the government estimates it costs Italy around €100 billion a year, or six percent of GDP. And such an openly anti-tax culture that there’s even a Facebook group called Evasori fiscali italiani: “Italian tax evaders.”

Making the situation trickier is that it’s not exactly black and white. Just like the Mafia isn’t a monolithic gang of Sicilian criminals who run brothels and drug-traffic while wearing fedoras and “Hello, My Name is Mobster X” stickers attached to their pinstriped suits, Italians who take advantage of their laws’ loopholes (or even evade those laws) aren’t often your run-of-the-mill delinquents. For those of us raised in the Puritan, follow-the-letter-of-the-law-or-be-an-evil-person tradition of the United States, this can be surprising.

I have a little neighborhood restaurant that I love. Family-run in a classic vein (dad in the back, daughter in the front), it serves regional specialties with fresh ingredients and great prices. The atmosphere’s cozy; the wine list is good. The daughter knows my name and my favorite appetizer, and when I come with a friend, asks about my redheaded fidanzato. When I bring guests, we’re immediately served up a bright smile, a basket of bread — and a form asking for the new customer’s name, address, and date of birth.

My sweet little neighborhood place is, after all, a “cultural association.” It’s the loophole for 99.9 percent of the aspiring Italian chefs who find restaurant licenses all-but-impossible to obtain. Declare yourself an associazione culturale (a cultural circle or club) and you can serve food and alcohol. Just make sure that everyone in your establishment is a member of your association; hence the information-collecting and the resulting membership card. (Oh, and don’t turn a profit. Hmm…)

It’s a challenge to explain an association’s practices to friends and companions who are new to Italy. No sooner do they breathe a sigh of relief that their data isn’t being collected for police-state purposes than they raise eyebrows at the whole idea. Oh, the corruption, those brows tell me. Oh, the criminal character of these Italians, finding every loophole they can to squeeze and sleaze their way out of their responsibilities!

As food-laden plates are served by smiling family members, that view doesn’t quite seem to fit. At the same time, few visitors to Italy really want to hear the details. And so the smart expat changes the subject altogether. It may be shirking one’s responsibility to the Italians and their culture to do so, but the strategy complies with a basic necessity: Making ends meet in a strange land.