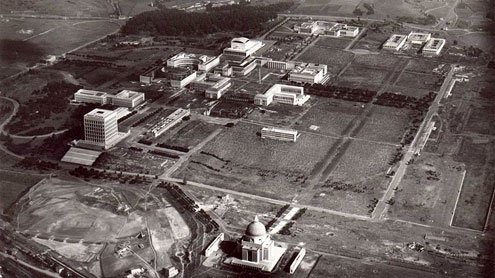 UR is a curious vision of grandeur interrupted. An acronym for Esposizione Universale Romana, the outlying neighborhood south of the center was first commissioned by Benito Mussolini, eager to celebrate 20 years of Fascist rule by creating a temple to his vision of Roman modernity.

For Mussolini and his Modernist builders, that meant linear architecture, symmetry and abundant use of travertine marble. In terms of urban planning, EUR was designed to direct Rome’s expansion southwest and toward sea. Set to open in 1942, the much-touted global exhibition was undone by World War II, after which no Mussolini remained to pick up the broken pieces.

Its drowsy reawakening began in 1950s and began to accelerate after Rome was awarded the 1960 Summer Olympics. At first, the prevailing view was to demolish the neighborhood — known as Europa and on occasion sometimes used as a venue for filming post-apocalyptic movies — and start from scratch. But cooler heads advanced an idea of organic expansion, which eventually won out and continues to this day.

At the same time, EUR, despite its sleek marble-lined avenues, never established its own food culture. Instead, it was seen as something of culinary wasteland with only a few stylish meeting places and eateries.

But trends change, particularly in food, and EUR, with its cluster of beehive office buildings, is slowly but surely turning into a foodie destination.

Is EUR worth a trip on its own merits? Probably not, based on the trick traffic flow on its vital artery, Via Cristoforo Colombo. But gastronomic destinations are growing, including “old school” classics and up-and-coming venues, and they’re more than worth of mention.

Il Fungo is on the 14th floor of the neighborhood water tower known as il fungo, “the mushroom,” with its tables offering phenomenal 360-degree views from unobstructed windows. Its menu is strong on seafood and the service is stellar, Old Rome style. Temptations include fresh Breton oysters and roasted mackerel with vignarola, burrata and thyme flavored breadcrumbs. The homemade pasta flour is all stone milled, which you can savor in the buckwheat fettuccine with local lamb, the fava beans and goat cheese and the eggplant ravioli with lobster, tomato and ‘nduja sausage. Il Fungo has a fine wine list and offers a variety of tasting events you can browse via the restaurant’s own App for mobile devices. • Il Fungo Open Mon.-Fri. lunch and dinner, Sat. for dinner; and Sun. only for lunch. | Piazza Pakistan, 1a. Tel.06.592.1433.

Cantina Castrocielo in the Torrino end of EUR (near its two main office towers) is a wine-lover’s haven, a gourmet boutique that lures a strong foodie crowd by offering up all kinds of possibilities. The “petit restaurant” kitchen serves excellent cheese and salumi-cured meats with wine or full-fledged meal items including baccalà petals served with sun dried tomatoes and pistachios or piquant pecorino cheese carpaccio with arugula, pine nuts and pears. • Cantina Castrocielo Open for regular store hours, and until 10:30 pm for drinks and food, closed Sunday | Viale degli Astri, 35. Tel.06.520.4979.

Il Gianfornaio has plenty of Rome branches, but its Viale Europa spot is the city’s second-largest (after the Ponte Milvio flagship store). This acclaimed bakery and cafe offers croissants, cakes, pastries, bread, and probably the tastiest mini pizzette on the planet. It also brews caffeinated beverages and caters for nearby businesses and parties. • Il Gianfornaio (EUR) Closed Sunday after 3 p.m. | Largo Apollinaire, 5/7. Tel. 06.9437.8203/06.9437.8204.

Il Gelato di Claudio Torcè This famed EUR artisan gelato maker, the first to introduce savory flavors into cones, has opened another branch on Viale Europa called Juicy Rome. The mainstream flavors — chocolate, hazelnut, and pistachio — are supremely executed. Add to these an array of seasonal fruit flavors (in all, the 100 or so gelati produced daily include 20 seasonal fruit flavors, 60 creams and 20 cremolati and semifreddi). On the offbeat flavor list include wasabi and green tea, peanuts, Parmigiano and sweet bell pepper with basil (perfect for pairing with cheese platters, soufflés or flans.) This store also serves yogurt with fruit, smoothies and healthy fruit and vegetable juices. • Il Gelato di Claudio Torcè Open daily | Viale Europa, 134/Via dell’Aeronautica, 105. Tel. 06.592.1563.

Move Natural Food is a health food and snack bar that uses only fresh organic ingredients. The chalkboard menu changes daily and includes vegan wraps, club sandwiches and an assortment of panini, salads and daily specials, plus desserts and freshly baked biscotti. When I need to detox or go on a juice fast, I head here for the apple, carrot, ginger and cinnamon smoothie. Another strong point, rare in Rome, is home delivery. If you book before 1 p.m. they also provide office lunch delivery. • Move Natural Food Open Mon.-Fri. lunch and dinner; Saturday dinner only | Viale Europa, 1/a. Tel. 06.591.1583.

Otbred — “hot bread,” get it? — is a gourmet cafe on Viale Beethoven on the Ostiense side of EUR. It’s best known for its pagnottelle, homemade ciabatta or pita pockets into which you can stuff fresh ingredients spooned from the counter. There’s also pre-prepared pagnottelle. I come here for the “Tostoj,” which is filled with bresaola cured beef, parmigiano and arugula, or the “Marconi,” stuffed with pancetta, primosale cheese and tapenade. The counter across from the sandwich bar brews good cappuccini and mixes decent cocktails, plus serves a good choice of salads for non-carb consumers. There’s no seating indoors, but plenty of nice benches outside. • Otbred Open Mon.-Fri. 7 a.m.-10 p.m.; Sat. 9 a.m.-10 p.m. Viale Beethoven, 43/45. No phone.

Palombini is a EUR classic. Mornings kick off with fine cappuccinos and flaky homemade cornetti (croissants). Next up, tramezzini and club sandwiches plus warm panini for quick snacks or light lunches. In the warmer months, you can sit on the beautiful patio, enmeshed in bougainvillea. Bread and pastry, gelato, and cooked dishes (plus chocolate pralines) are all made on the premises. • Palombini Open daily 7 a.m. to midnight | Piazzale K. Adenauer, 12. Tel. 06.591.1700.

4.5 Bistrot is owned by the eponymous organic agriturismo farm situated on Via Ardeatina. The bistro’s hours run from breakfast to dinner, lunch and aperitivo included. It offers all-you-can-eat buffet style dining, with a convenient €7 lunch and €8 dinner with unlimited bottled water. • 4.5 BistrotViale America, 3 No phone.