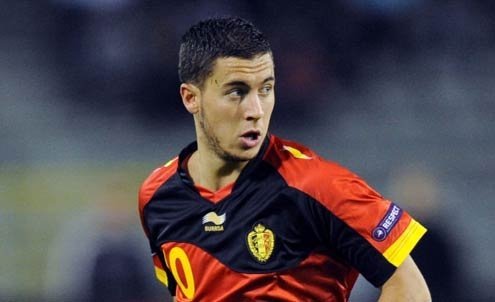 Chelsea-bound Eden Hazard will become one of many Belgian international footballers to ply their trade in England's Premier League.
A

s Europe’s finest fight it out at Euro 2012, here’s a look at which sides threaten to crash football’s next major party.

Belgium: Perhaps the strongest of the European nations to have failed to qualify for this summer’s tournament, Belgium’s side is studded with some of the English Premier League’s top performers in 2011/12.

Goalkeeper Simon Mignolet has consistently kept once highly regarded Craig Gordon out of Sunderland’s first-team with a string of assured performances. The defense boasts superstars such as Manchester City’s inspirational, title-winning captain, Vincent Kompany, along with Arsenal’s Thomas Vermaelen and Ajax’s highly sought-after Jan Verthonghen, all of whom have the tendency to add goals to their game, and, in their mid-20s, promise to convert their impressive club form to the national scene for several years to come.

The midfield is just as impressive for its array of precocious talent, foremost among them Eden Hazard, Chelsea’s reported £32 million signing. His scintillating performances for French club Lille have earned him Ligue 1 accolades in just four seasons, including twice Young Player of the Year and twice Player of the Year. Supporters of Everton and Fulham will be familiar with the technical prowess of Marouane Fellaini and Moussa Dembélé respectively.

Likewise fans of Portuguese giants Benfica and Porto can testify to the talents of Axel Witsel and Steven Defour, the latter helping his club to the league title this term. Both men, along with Fellaini, were key members of the Standard Liège side that has re-established itself as the country’s top club side and a regular Champions League competitor in recent seasons.

Olympiacos’ prolific marksman Kevin Mirallas and Chelsea’s 19-year-old prodigy Romelu Lukaku, whose exploits at Anderlecht saw him tipped as the natural successor to Didier Drogba at the London club, complete a dangerous attack.

A golden Belgian football age seems around the corner, with the team’s lowly FIFA world ranking (54th) almost certain to rise in the near future.

Bosnia and Herzegovina Stricken by political and economic struggles in recent decades, Bosnia and Herzegovina’s tremendous rise to 29th in FIFA’s world rankings betrays the fact that a vast proportion of their sporting talent has preferred to represent neighboring Croatia and Serbia either due to ethnic identification or to the higher salaries offered by their bitter rivals.

One can only imagine just how strong this relatively small nation could have been if players such as Darijo Srna, Mladen Petric, Vedran Corluka (Croatia), Neven Subotic, Zdravko Kuzmanovic (Serbia), Marko Marin (Germany) and even Serie A’s legendary striker Zlatan Ibrahimovic (Sweden) had decided against jumping ship.

But those remaining on Bosnian turf have done their fellow countrymen proud, twice coming within a match of securing qualification for a major competition, as home-and-away playoffs for the FIFA 2010 World Cup and UEFA Euro 2012, both of which ended in defeat to powerhouse Portugal.

Whether the current side can go one step further and qualify for the 2014 World Cup in Brazil is uncertain but far from impossible given the quality of several well-established players on the European stage.

The forward pairing of Manchester City’s Edin Dzeko and VfB Stuttgart’s Vedad Ibisevic represents a highly potent attack. Both came to the fore in Germany when Ibisevic propelled little-known TSG Hoffenheim to the Bundesliga’s summit in December 2008 before Dzeko’s unstoppable form helped Wolfsburg to the title later that season. Consistently scoring a goal in every two games, it was with little surprise that both men joined larger clubs, Dzeko’s 15 goals helping Manchester City to a first Premier League title this May.

Zvjezdan Misimovic has long been a great servant to Bosnia’s midfield as the most-capped player in the history of the team. The Dynamo Moscow player provided the most assists in the league (20) during Wolfsburg’s 2009 Bundesliga triumph.

Meanwhile Miralem Pjanic and Senad Lulic have adapted admirably to life in Serie A, providing goals and assists alike in their debut seasons at AS Roma and Lazio respectively. Goalkeeper Asmir Begovic has impressed as Stoke City’s first-choice between the posts in recent seasons, while Sevilla’s veteran defender Emir Spahic continues to bring savvy and experience to Bosnia’s defense as captain.

Wales Long-considered the minnows of the British Isles, Welsh football has reached stratospheric heights after a dramatic, and regrettably traumatic, 10 months. It was only in August 2011 that Wales had plummeted to their lowest ever world ranking of 117th. However a string of accomplished victories in the latter-half of their Euro 2012 qualification group games, along with a 4-1 friendly defeat of Norway, now means they are sitting pretty in 38th, overtaking Scotland (41st) and Northern Ireland (103rd) in the process.

The team owes its miraculous assent to the positive and forward-thinking management of the late Gary Speed, who put his faith in an exciting crop of young, emerging talent, as he symbolically handed the captaincy to 21-year-old Arsenal midfielder Aaron Ramsey. Speed died of an apparent suicide last November, to leave a nation in mourning and worried that the project he had begun so successfully might lose momentum. In appointing Chris Coleman as Speed’s replacement, the Football Association of Wales has once again opted for a young, Welsh manager, inclined to nurture the array of young gems at his disposal.

In Gareth Bale, the side undoubtedly boasts a world-class winger, brimming with confidence after his 12 goals for Tottenham Hotspur this season. Ramsey too has matured quickly into his midfield role for the Gunners, after taking on the responsibilities once occupied by the since-departed Cesc Fabregas and Samir Nasri.

The form of Wales’s solitary Premier League representatives, Swansea City, will also be pivotal to the fortunes of the national side. 22-year-old Joe Allen formed one of several well-oiled cogs in midfield, as Swansea took the top-flight by storm with their fearless passing game. Ashley Williams and Neil Taylor also impressed in defense for the Swans, who kept 14 clean sheets last term.

Although the Welsh attack still relies somewhat heavily on veteran striker Craig Bellamy, Norwich City’s Steve Morison has enjoyed a good year with nine Premier League goals, while much interest will surround 23-year-old Simon Church, as he prepares for action in England’s top division next season with newly-promoted Reading.