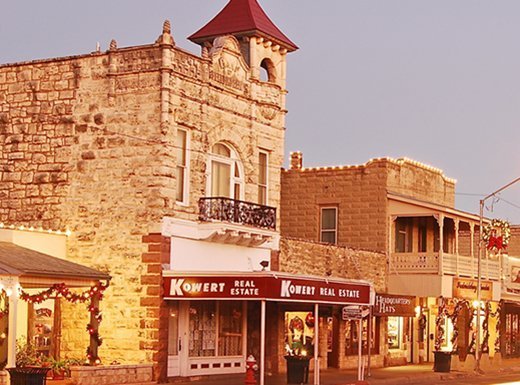 f you can’t get to Europe, go to Georgia. Or North Carolina. Or Texas.

There you’ll find towns — small and smaller, some no more than a bend in the road — that pretend to approximate the looks of an Alpine or Bavarian village.

Fredericksburg and several other towns in rural Texas were settled by actual German immigrants, who found their way into the Lone Star State’s interior Hill Country in the mid-1800s, poor souls. You can find charming B&Bs and a World War II museum in Fredericksburg, which decks its halls for the Yuletide season. There’s a postcard moment at every turn.

In North Carolina, there is a small town called Little Switzerland off of the Blue Ridge Parkway. As advertised, it is indeed little — a resort village with a general store, bookstore, café, and a few hotels.

I was craving a weekend getaway and a change of scenery, but Texas was a bit of a haul from my north Florida home. Helen, Georgia, on the other hand, a town of about 550 people, was only a six-hour drive away, tucked into the foothills of the Appalachian Mountains between the Chattahoochee and Nantahala Forests.

I’d never even heard of the town until I watched an episode of the hit Netflix series “Atlanta,” where the protagonist goes with his girlfriend to her hometown. The joke is he’s black and she’s half-black, half-Deutsch and grew up in this Bavarian outpost.

Drenched in Bavarian kitsch, the town looks like what would have happened to America if the Germans had won World War II.

But unlike the authentic Texas towns built by wandering Germans, Helen is a fabrication, an ersatz facsimile of what an Alpine village would look like to Southerners after a weekend beer bash polished off by a schnapps chaser. Drenched in Bavarian kitsch, the town looks like what would have happened to America if the Germans had won World War II.

In fact, the people walking around this pre-fab burg on a rainy night looked as fat and pale as uncooked bratwurst and a side of kraut. Their skin was splotchy with sunburn and heat rash, and their clothing crawled uncomfortably up around their portly bottoms and protruding bellies as they grazed from funnel cake stand to ice cream shop to candy store.

The so-called town was nothing more than a collection of hotels, gift shops, restaurants, and a putt-putt golf course all trimmed in Alpine lumber. There is a multi-level claptrap mall called the Heidelberg, a place called the Fried Cheese House, and a candy store named after Hansel and Gretel.

Somehow the town fathers decided this was a good look. But it obscures the natural beauty in which it is nestled. There are beautiful waterfalls just outside of town, mountains to hike, and rivers to kayak. One waterfall, Dick’s Creek Falls, is where early settlers descended in search of gold.

Helen became a bustling timber town for a while, but when the bottom fell out of the timber market, the town leaders decided to adopt zoning codes requiring everything to be built in early Wehrmacht “Sound of Music” schmaltz. Even the McDonald’s is dressed up in Bavarian drag.

There are plenty of dubious places to eat, and some that look promising, like a steakhouse. But when in Helen, you know, I wanted authentic Deutschland food. I found it at the north end of town at a place called the Hofbrauhaus, a hotel and restaurant with a biergarten on the banks of the Chattahoochee River.

There are 20 hotels listed in the greater Helen area. I chose the worst of the lot.

I decided to dine inside and appeared to be the only customer. The waiter and beer maidens were dressed in lederhosen and St. Pauli Girl dresses with dazzling white aprons. The bar looked as if it had been imported from Munich. It had dark wooden floors, exposed beams, and rough-hewn tables. It was cozy.

I sat at a table by a window overlooking the river and studied the menu over a beer. I settled on a pork shoulder with sauerkraut, red cabbage, and potato salad. The pork was as big as my head and could have served an entire family. I ate what I could before getting the meat sweats, washed it down with a German draft beer, and believed for a moment that I was transported to the Black Forest.

Reality came crashing down when I got outside and back into my car right around the time the sky opened wide and the deluge began. In my car, wipers working overtime, I drove slowly through the center of town, all four blocks of it, and made my way back to my hotel. There are 20 hotels listed in the greater Helen area. I chose the worst of the lot.

My supposedly smoke-free room had the definite odor of tobacco. The pool looked like a giant petri dish, and the hotel didn’t seem to have the acquired allotment of parking spaces to accommodate all of its guests. I put the leftover pork shoulder in the hotel room fridge and wandered around town some more. There was a bar with a band playing bad bluegrass, and another pumping out music with a heavy urban beat.

So much for Helen’s nightlife. I called it an evening and the next morning headed for Dick’s Creek Falls, leaving the pork shoulder behind for the next hapless lodger.