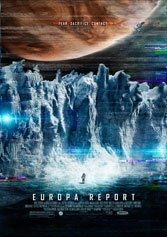 Ecuadorian director Sebastian Cordero’s sincere but unsatisfying sci-fi thriller is in the newfound tradition of found footage, videotape postmortems made public to spike impending doom and gloom with sentimental inspiration. Europa One is a private spacecraft with a multinational crew dispatched to the Jupiter moon of Europa after NASA suggests life might lurk beneath its ice layers. It opens when the mission’s realty show-like daily show is cut off following a solar storm. Next step, predictably, is airing of the jagged interlude between the disruption and the end of the mission. Something went badly and desperately wrong after the cutoff, leaving Cordero to reconstruct the descent into the moon’s abyss. He begins ably enough, with a crewmember attempting repair work cut loose to drift into an impressively immense void.

But once on the planet — their found footage fate decided — there’s only the run-up to the end. Cordero fractures time lines and ramps up the video flickering to give the narrative a nervous real-time feel. He zooms in on the earnest astronauts as they realize they’re in over the heads. He manipulates soundtrack and lighting to force-feed portents. Static is his best friend.

But tropes and tricks carry deep space stories only so far. Suspense depends on the characters who convey it, and Cordero’s acting crew is serviceable at best. In the end, they’re just acting out their own “brave” decimation, with a predictable kicker. Moral of the story: Don’t mess with “foreign” ecosystems unless you’re ready for crash landings, hot flashes, and things that glow in the dark.