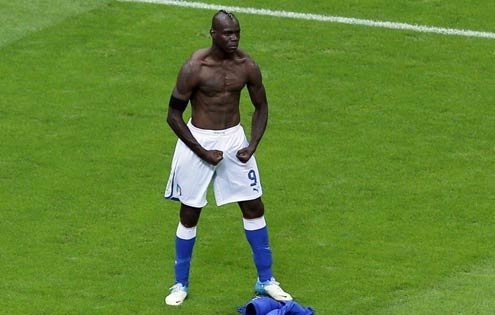 Italian striker Mario Balotelli celebrating after scoring against Germany in the semifinals.
I

like football. It unites people. It excites them. Though Italy recently lost the European Championship final to Spain, emotions ran high both before and after the match. Italy had defied expectations just by reaching the final.

Only football can distract so many people at once, and in the best of ways. A friend of mine travels to Africa often. Each time he comes back he tells me how the people he meets know more about Manchester United than he does. National borders are irrelevant.

Then there’s my partner, who gets a look of incredulous joy — a combination of shock and happiness — whenever he meets someone who supports his team. It’s as if someone had just handed him the Champions League trophy.

In fact, if you had to point to one thing that unites Londoners and Romans it would be their mutual love for football, or calcio (a calcio literally means a kick).

Both countries boast some of the best teams and players in the world. Both are home not only to strong national squads but also to revered football giants such as Arsenal and Manchester United; AC Milan and Juventus. Many of the clubs have fans that pledge their life happiness to the success of their team. Football fever affects people of all persuasions and vocations. As Scottish player and Liverpool manager Bill Shankly once said, “Some people believe football is a matter of life and death, I am very disappointed with that attitude. I can assure you it is much, much more important than that.”

A football match marks the one occasion when Italians can be unequivocally patriotic. Politics, bunga bunga parties, financial worries, and match fixing scandals are briefly set aside. An Italian in London can finally meet her English counterpart on equal footing (even superior footing, judging from Italy’s elimination of England at Euro 2012).

While English media tends to be quite judgmental of Italian politics (which I’ve written about before), football is a leveler. Team ability and skill creates a sense of mutual respect that doesn’t allow for bias. There’s also camaraderie. A number of Italian players play for English football clubs — including star striker Mario Ballotelli — and former Italian players such as Roberto Mancini (who won the Premier League title with Manchester City) and Roberto di Matteo (who guided Chelsea to the Champions League crown) are among Britain’s top managers. Supporting a club isn’t patriotism but loyalty, and loyalty has no nationality. You’re an AS Roma or Chelsea fan no matter where in the world you’re from.

My own football love story started in 1998 when at age 10 I was vacationing in France with my family when Brazil and France met in the World Cup final. France had never before made it to the final. When the French team crushed the Brazilian squad 3-0 the whole country suddenly erupted in glee. Everywhere we went people waved French flags, beamed, and hugged each other. It was a magical moment.

Italy had its own magical moment at the 2006 World Cup in Germany. The final between Italy and France was a memorable game, entertaining, controversial, and gripping. Veteran French captain and star Zinadine Zidane, in his last match before retirement, was red carded for head-butting Francesco Matarazzi after the two had exchanged words. The unforgettable butt as well as his slow walk off the pitch, head bent down, is still replayed today.

The 1-1 game was decided on penalties, a moment that all die-hard fans dread. I still remember the where and when: It was July 9, 2006, and I was at my godparent’s house in north Italy. It was my sister’s birthday.

As soon as Italy won the shootout to capture its fourth World Cup title the streets filled up with hundreds of honking cars. We walked to the local piazza where people had draped themselves in Italian flags, cheering.

It was a triumph of excitement, loyalty and happiness. Former British star Bobby Charlton may have said it best, nourishing the spirit of fans and players alike: “Some people tell me that we professional players are football slaves. Well, if this is slavery, give me a life sentence.”

Euro 2012, again won by Spain, resonated with greater importance then previous championships. Every day comes more news of a “broken Europe,” a Europe struggling to retain the force and influence it once had. We’re told of bitter rifts between the wealthy countries of the north and debt-ridden southern nations, whose animosity casts a shadow over the EU. The championships thankfully allowed us to forget all that. On display was something Europe is especially good at — football. To be sure, a little bit of politics was involved here and there, but all in all people from all over the world rediscovered their love for a continent that remains truly great in so many ways.