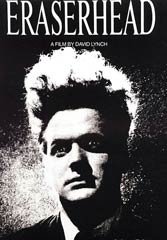 There’s no quarreling with David Lynch’s description of his debut movie as “dream of dark and terrible things.” Start to finish — wantonly ignorant of both — it is a prolonged black-and-white snapshot of human anxieties force-fed the surreal and the supernatural and nourished by a single milky nightmares. Bewildered Henry Spencer (Jack Nance), a muddily dapper printer on vacation for no known reason, is put through the interplanetary paces of in Depression-like apocalypse landscape poxed with a wife who makes clicking sounds, a premature infant that resembles swathed and cackling sperm, a plumber named Bill who serves bleeding manmade chickens, a lady in a radiator with necrotic boils, a pencil-factory chief with a penchant for skulls, and a temptress hooker who behave likes a gypsy.

All these ingredients emerge to fill out the Lynch-concocted primordial ooze, an issuance that suggests so much bad seed and a misfit maker who is no fan of fatherhood and pulls all the wrong levers. As narrative surrealism, it is a deliberate slew of cues, metaphors, mist-draped images, and protean organisms — too many, in fact, for its own jagged good.

But few American filmmakers have ever ventured deep and unfettered into the gestational muck, and Lynch does so fearlessly, with snarling if vulnerable confidence, making his Henry into a man who sees his infant-driven undoing time and again but is helpless against all things dark and the terrible because someone or something else is manning the controls.

For devoted Lynch fans, most of his later imagery can be found in the folds of these unsettling 90 minutes. His premature baby, a squirming witch tit with a gnarled mouth, was later enlarged and embellished to create the alien creature in the Ridley Scott’s sci-fi film of the same name.

Rating this film in conventional terms is useless. It should be seen, and either appreciated or abandoned, depending on individual response.