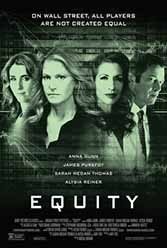 Director Meera Menon turns the tables on the male-dominated Wall Street thriller with this superbly venomous cat-and-mouse game tale of ambition, jealousy and betrayal with New York and San Francisco as backdrops. Anna Gunn is Naomi Bishop, a driven investment banker who’s always been on the wrong side of the arrogant boy’s club track. “I like money,” she says. “I like knowing that I have it.” But when she zeros in on an IPO involving a West Coast social media company that swears by its impenetrable secure software, things start going haywaire. Samantha Ryan (Alysia Reiner), a former classmate now a driven white-collar ADA, not so casually remakes long-lost contact. Turns out Naomi’s banker-broker lover Michael Connor (James Purefoy), who swears by remarks such as “everyone has an agenda,” is an insider-trading target of Sam’s. Then there’s Naomi’s assistant Erin Manning (Sarah Megan Thomas), who while eager r to make friends and influence people, is growing quietly bitter at playing second fiddle.

A fine script by playwright Amy Fox puts all the right emphasis on the interplay between the three lead woman as Gunn’s hardcore Naomi tries to stay a step ahead of men and women both. She boxes in her spare time. She’s serious. She trusts no one. She thinks, at least for a while, that she has a deal of a lifetime in hand. When she doesn’t, and is told to take a glass-half-full approach, she delivers a line that reverberates à la Brando: “I was suppose to be a mother fucking rainmaker.”

Menon sets out to not so much to level the male-female playing field as to insist that greed lacks gender. She succeeds royally. Gunn is flat-out commanding, shoved-aside Erin appropriately sly, and Sam direct but also devious. The men, meanwhile, are a sideshow — minus Michael, who exists to embody male charm and duplicity, which he does to fan the flames of the conned women around him.