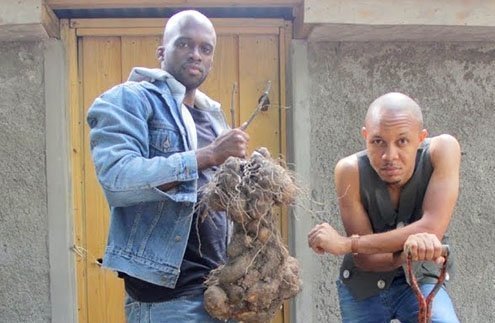 n interesting trend in English-speaking pop of late is how it’s picked up on Caribbean influences. Drake’s “One Dance” single is a good example, but he’s (typically) jumped atop a wave as it crests. It’s the kind of poaching typical of pop’s imperialist tendencies.

Equiknoxx began more than a decade ago and has produced for notable heavy hitters like Busy Signal and Beenie Man. Support from beyond the Caribbean helped the undertaking. Britain’s Swing Ting’s Balraj Samrai and Mark Ernestus got involved. Eventually, these connections led to Equiknoxx landing on Demdike Stare’s DDS label. It makes sense: Demdike’s M.O. is to further out-there electronic music and dancehall that’s lesser-trod than, say, techno or house.

Gavsborg and Time Cow, Equiknoxx’s core members, do all the heavy lifting for Bird Sound Power. Though the oldest song dates to 2009, there’s little doubt about what the group aims to achieve. If you’ve forgotten how the world-conquering headache that is dubstep sounded in its initial phase, “Clunk” is a tidy reminder. “Clunk” could pass as a sampling of the marimbas on some crate-digging West African compilation. “Timebird’s” sandpaper squawk acts as a counterpoint to the low rumble of the bass tones. “I Really Want to Write on Her Purple Wall” breaks the all- instrumental pattern with vocals.

Whatever the song, it’s refreshing to hear such an intriguing Caribbean response to pop’s recent borrowing.

If the Jamaican music world is easy to eavesdrop on, Eric Honecker’s East Germany was not. Honecker ran East Germany from 1971 through the fall of the Berlin Wall in 1989. His was a murky, black box police state in which kids informed on their parents and every citizen was a potential spy. The idea of a counterculture or an underground during his rule seems unthinkable, even today.

A recent compilation does its part to dispel that notion, at least musically. Ende vom Lied: East German Underground Sound 1979-1990 (Play Loud! Productions) is the work of Dietmar Post and Lucía Palacios, a record- and filmmaking duo who have covered releases from luminaries such as Silver Apples, Faust, Monks, The Raincoats, and The Gossip. Nothing in the duo’s catalog, however, reaches the scope or ambition of this dark, quirky assortment of songs.

Ornament & Verbrechen’s moody, austere “When I Am I Am Not” from 1988 opens the 24-song collection. As you might expect, a fair portion of this material leans toward serious EBM, industrial and post-punk — the stuff of a “Sprockets” sketch, in other words. But there’s also the barely functioning punk of L’Attentat and folk-punk of Der Schwarze Kanal, the spectral lo-fi of T42, the high-speed Minutemen-esque rollicking of Andrea’s Auslauf, the childlike melody maker AG Geige, and the endless dub of Magdalene Keibel Combo. The ground here is surprisingly diverse despite its lengthy runtime.

In each of these tracks, most under three minutes, it’s fascinating to hear music that was made just outside STASI’s reach. Though not presented in chronological order, it nonetheless captures a time when the restless urge toward German reunification was muscling toward a tipping point. This is the sound of the depths rising to a crest.