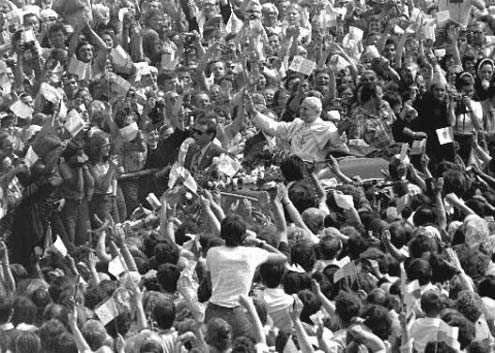 pic is a tricky word. So is historical. And groundbreaking. Invited to make history, Americans gladly help the monumental feel at home. The Obama inaugural offered a perfect vessel for the kinds of larger-than-life yearnings the United States usually struggles to fully contain, let alone publicly express.

No wonder few found the right words to represent their feelings — aside from epic, historic, groundbreaking. Some mentioned relief at the tout court squelching of dial-up evangelism and the silencing (for now) of its warrior-class snarlers, which was fair enough. Who in their wildest dreams could have replaced George W. Bush’s with a handsome and eloquent black president cookie-cut (Spaced, Booked and Tubed) for the 21st century. Television’s thrall and awe dotted the public’s giant “i.”

Two 30-year-old events, though parallel in scope, went largely unmentioned (and that too makes sense; America is not obliged to recall the catharsis of others). But the epic, the historic, and the groundbreaking, have their own memory lane. Along which context maintains a residence, or should.

On Feb. 1, 1979, Ayatollah Ruhollah Khomeini returned to Iran after 14 years of exile. The Shah had fled, the country was in ruins, Iran was governed by a long-forgotten secular prime minister named Shahpur Bakhtiar.

What mattered instead to Tehran was the return of a messiah. The much-corrugated Khomeini, then 78, wept briefly at the airport, where gathered dignitaries greeted him as a mercurial and menacing harbinger. Form mattered less than possibility.

Students alienated by the Shah’s police-state methods and peasants angry at his venality put hope in an aging holy man who prized modesty, asceticism and religiosity. His one-time jailing by the Shah (which led to his exile) ensured his pedigree.

An estimated five million people, nearly a tenth of the country’s population, lined the motorcade route. Crowds writhing for a better look clashed with police. The earth shake under the rhythmic stomping of the multitudes.

Bakhtiar, intimidated, barred TV transmissions and ordered a military parade, an almost ludicrous pout. He responded to Khomeini’s threatening arrival speech dismissing it. “Don’t worry about this kind of speech,” said Bakhtiar. “That is Khomeini. He is free to speak but he is not free to act.”

Two weeks later Bakhtiar was ousted and forced into exile. That was Khomeini. So, perhaps, was Bakhtiar’s 1991 murder in Paris, two years after the grand ayatollah’s death.

Questions of goodness aside, there’s no challenging the spontaneous public acclaim that magnetized Khomeini’s return or the liberating sentiment it unleashed. Hitler never put so many in one place. Five million don’t lie.

On June 2, Pope John Paul II arrived in Warsaw for his first trip home following his election in October 1978 as the first non-Italian pontiff in 455 years. Then as now, Poland was predominantly Catholic. At the time the country was controlled by atheist Communists tucked in Soviet pockets. The Solidarity trade union — another groundbreaker — hadn’t yet been formed. Dissent was limited, as were public gatherings.

Between two and four million people turned out to see the pope’s open-top motorcade and hear the ensuing Mass. At the time, Warsaw had a population of just over a million while Poland’s entire population was 35 million.

His nine-day visit attracted more than that number, as some citizens followed him station-to-station, gorging the crowds. At the Marian sanctuary of Jasna Góra, four million showed up. “Mary’s will is being fulfilled. Here I am…” said the pope.

The emotional outpouring all but paralyzed Communist officials, who finally put protocol aside and deferred to the event’s immensity. In Krakow, where the pope had been archbishop, state television broadcast his sermon live.

At Victory Square in Warsaw, the simple centerpiece of the pope’s sermon is still credited for ushering in Polish communism’s definitive unraveling: “Christ cannot be kept out of this part of the world: To try to do this is an act against man.”

Writing about politics in 1950, sociologist David Riesman dropped a question to get to an answer: “How can Washington, it is sometimes asked, compete with Hollywood and Broadway?” The answer was to make politics the grandest theater of all. Obama sweeping spectacle of visual and verbal bonding did just that.

Which is heady stuff indeed, so long as you recall what’s in the closets of the past.