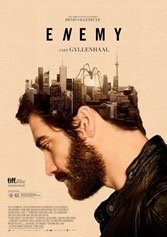 In Canadian Denis Villeneuve’s dreamlike thriller, an awkward and introverted university Toronto history professor named Adam Bell (Jake Gyllenhaal) watches a strangely surreal movie in which he sees his doppelganger, a minor actor named Anthony Claire. Mesmerized and terrified, the meek Bell tracks him down the far hipper Claire. Predictably enough, the collision of the two men creates ripple effects that make it difficult to distinguish the actual from the magical, the linear from the ambiguous, one man from two. Villeneuve adds to this increasingly pained and lugubrious complexity by zeroing in on the erotic — à la Atom Egoyan — as if to advertise its revelatory dimension.

Actor Claire has a cloying pregnant blonde girlfriend (Sarah Gadon); teacher Bell a lithe blonde companion (Mélanie Laurent). The men are identical. Use your imagination. But just what Villeneuve is out to say in a story heavy on cello-powered brooding, Rembrandt-in-reverse portraits — reams of shade in place of beams of light — is something of a mystery to the movie itself.

Is it a matter of who wants to be whom? Or which sexual reverie prevails over the other when the meek Bell and the voyeuristic, Claire, mirror images, clash and thrash in the same male space (Bell’s mother insists he give up his “fantasy of becoming a third-rate movie actor.”)?

Questions of identity and being waft around like noxious fumes, as does the Hegelian notion of endless recurrence, but the whole lacks the subtlety necessary to do much more than probe the sexually sinister, which, given the pained tone, makes even an over-the-top, sci-fi kicker seem blasé. Though the script is based on Portuguese Nobel winner Jose Saramago’s 2004 novel (and opens with the Saramago line, “Chaos is order yet undeciphered…”), cold Toronto does a poor job of entertaining hot Latin fantasies.