Enemy of your enemy 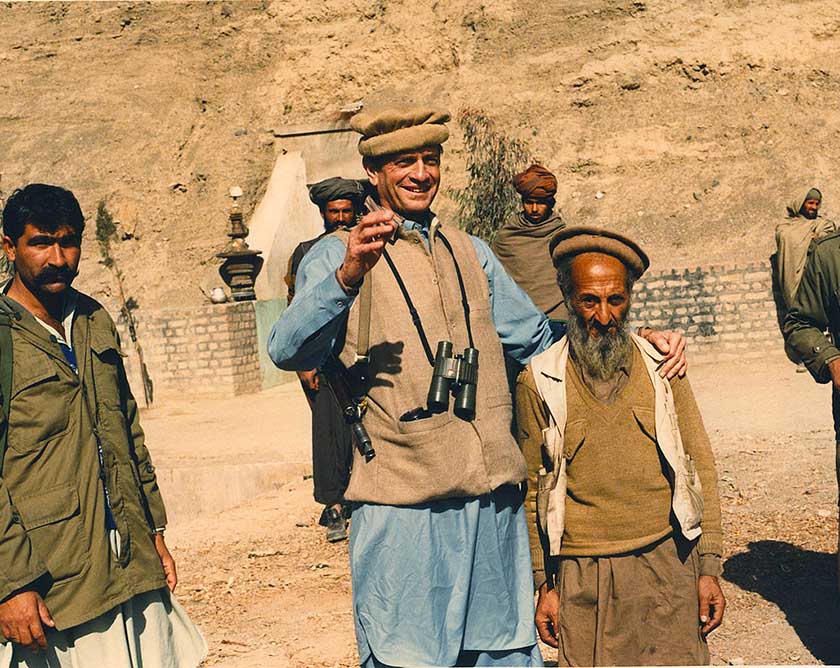 he modest amount of insight I have come to acquire about the tortured history of Afghanistan in recent decades I owe to a translation project that, over time, stopped being just an exercise in transforming a story told in one language, English, into another, Italian, but also a personal plunge into a landscape of nearly unimaginable national torment.

Some 15 years ago, an Italian publishing house retained me to translate the American best seller, “Charlie Wilson’s War,” by writer and CBS journalist George Crile. It’s the astonishing story of how a U.S. congressman used political influence, ingenuity, trickery, and contacts to ensure the funding of an insurgency movement against Russian troops after the Soviet Union used a series of pretexts to invade Afghanistan in 1980 — an ill-fated occupation that, like so many before and after, ended with an ignominious pullout in 1989. 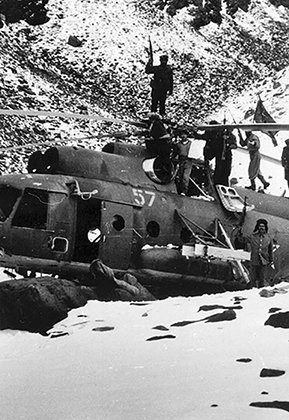 Charlie Wilson-funded insurgents celebrating over a downed Soviet helicopter in the 1980s.

The edition of the book the publisher sent me to work on was the one circulated in Great Britain. The British publishers had decided to drop Wilson’s name from the title, at the time reasoning that no one in Europe would know or care about the secret manipulations of a Washington politician. All that changed a few years later, when the events of September 11, 2001, pushed Afghanistan to the center of the global arena with even Hollywood wanting in on the action, making its own version of “Charlie Wilson’s War,” with Tom Hanks in the starring role.

The title of the British edition was “My Enemy’s Enemy,” and it focused on an old and celebrated saying: “The enemy of your enemy is your friend.” The Italian version used the same title as the British, but added the American original as a subtitle: “Il Nemico del mio Nemico. Afghanistan 1979-1989. La Guerra segreta del deputato Wilson” (Il Saggiatore, 2005).

The Charlie Wilson story is so extraordinary that the only way to do it any justice is to move backward in time, to 1989. On February 15 of that year, just months before the fall of the Berlin Wall, Red Army General Boris Gromov, the commander of the Soviet military contingent in Afghanistan, crossed the Friendship Bridge over the river Amu Darya and, with what was left of his battered troops, retreated north into Uzbekistan, then still part of the Soviet Union. Nearly a decade after storming Kabul and occupying the rest of the rugged Central Asian nation on the pretext of saving the country’s imperiled Communist movement, all was lost. Within a year, communism itself was lost as well.

Like so many military efforts before and after it, Moscow’s efforts to unite Afghanistan under uniform leadership, in this case Communist, ended in abject failure. Friendship Bridge, built by Russian engineers, never lived up to its name.

But why did it all go so wrong for the Russians, as it later would for the Americans? What precipitated the Soviet Union’s worst military embarrassment?

Answering that question requires burrowing even deeper into the Afghan wormhole, and this is where the name Charlie Wilson begins to pop up.

At this juncture, some context is vital.

Moscow did not rush casually into Afghanistan. In Daoud Khan’s short-lived post-monarchy period, corruption and disarray, always present in Kabul and its provinces, only deepened further, as did Islamist contempt. In 1978, Daoud Khan was toppled, inciting a power tussle that became known as the Saur Revolution. Amid this upheaval, Moscow saw an opportunity to bolster its supporters — if only they were not at war with each other.

As it was, the conflict pitted the Khalq Afghan Communist Party against the less dominant Parcham faction. When the Khalq gained the upper hand, it began executing its rivals by the thousands, imperiling the Soviet’s newfound Afghan project. With a Communist turf war raging, Moscow felt it had no choice but to restore order, a move in line with the Brezhnev Doctrine that loosely allowed for the use of force in defense of imperiled socialist nations. The doctrine helped rationalize the Prague incursion of 1968 since the Prague Spring was seen to endanger socialist norms.

So it was that at Christmastime, the Red Army, using paratroopers and sending mechanized divisions across the Friendship Bridge from Uzbekistan (then a part of the Soviet empire), invaded rocky Afghanistan. Efforts to quell the Communist infighting having failed, the Red Army took center stage despite warnings from some Soviet military advisors that the move could backfire — which, in fact, it would.

Charlie Wilson saw a way to use his Capitol Hill influence to give the weapons-poor Mujahedeen a boost against the Soviets.

The Russians moved to set up puppet presidents loyal to Moscow and disdainful of Islamic militancy. This emboldened an already strong Islamist-led guerrilla resistance movement that called itself the Mujahedeen — “the freedom fighters.” Though­ the group included both Sunnis and Shiites, usually at war with each other, they briefly became brothers in arms against the Soviets. The Mujahedeen cradle would later produce both the Taliban Sunnis and Al Qaeda Shiites. A Saudi named Bin Laden got his start in that fight.

In general, U.S. policymakers tacitly back such insurgencies on “enemy of my enemy” grounds, with communism at the top of the list.

But unlike the open cosying up to Saddam Hussein done to ensure he’d use Iraq as a buffer against Iran, any support for the Mujahedeen struggle had to be on the sly. Open American backing of a group intent on killing Red Army soldiers would not have gone over well during the Cold War.

Any help provided to the future Taliban and Mr. Bin Laden would have to run through back channels. No one at the time was particularly concerned that Islamic radicalism could have global repercussions, let alone that backing an enemy of an-enemy could bear a third adversary as large — if not larger — than the first two.

Enter Charlie Wilson, the busybody Texas politician who loathed the Soviet Union and saw a way to use his Capitol Hill influence to give the weapons-poor Mujahedeen a boost.

With CIA agent Gust Avrakotos at his side, Wilson hatched a plan intended to make life miserable for the occupying Soviets by systematically subsidizing the insurgency. Thanks to his impressive House credentials, he turned into the Mujahedeen’s leading American benefactor.

It gets better. Wilson ranged beyond Washington for help. He enlisted socialite Joanne King Herring (nèe Johnson), giving the effort a real Hollywood spin (the movie was released in 2007).

He also befriended then-Pakistani President Muhammad Zia ul-Haq, Zia, a military man who, while he considered himself a friend of the West, was always in search of greater leverage.

Wilson was a member of the House Appropriations Subcommittee on Defense and responsible for, among other things, funding CIA operations. What better leverage than the president of Pakistan having such a friend?

Everyone involved in the scheme understood opportunism as well as the “enemy of my enemy” logic. Again, no one at the time guessed the Afghan and Saudi Islamists wouldn’t stop with the Russians.

With Zia’s help, Wilson’s weapons made their way into Afghanistan on the backs of innocent-looking Tennessee mules that trudged through the Khyber Pass.

These days, with relations between the two countries as cold as ice, such a plan would be unthinkable. Consider that Pakistan’s intelligence services were not made aware of the U.S. raid that led to Bin Laden’s 2011 assassination — still a sore point between the intelligence agencies of both countries. Pakistan had done little to hide the fact it abetted Taliban aims. Times change. As do enemies of enemies.

What the insurgents couldn’t get via Wilson’s trickery, they got by raiding Soviet munitions bunkers. Within a few years, the Mujahedeen had a healthy supply of automatic weapons, anti-tank rockets and mines. They attacked the Soviets in the same way Iraqi and Taliban fighters would attack U.S. troops, using traps and forcing local populations to cooperate. Dirty was the name of the game.

Soon Wilson and Zia became friends, and the death of the latter remains something of a mystery. He was killed in the crash of a military plane (with U.S. personnel aboard) in October 1988. Even today, the mechanical problems explanation is believed by few.

Perhaps the greatest irony of the 1989 Soviet withdrawal is that within 18 months there would no longer be a Soviet Union.

The moral of the story is that Wilson’s efforts paid off, at least in part. According to Crile, who died more than a decade ago, Wilson was able to secretly deliver the funds the insurgency needed to survive. He was determined, writes Crile, to not only “give the Russians a bleeding nose,” but also make them feel as humiliated as the U.S. did in Vietnam. Just as the Americans were forced to flee Saigon in 1974, the Russians were forced backward in 1989. Few guessed the U.S. would openly choose to repeat the Soviet error, this time in an effort to eradicate the freedom fighters-turned-terrorists it blamed for 9/11. The result? A second Vietnam-style exodus.

Sadly, Afghanistan itself gained little from all these machinations. The Soviets were soon followed by the Taliban, who, after a 20-year guerilla war against American troops, are now all but reinstated – to the chagrin of many Afghans that had hoped for better.

In hindsight, Operation Enduring Freedom, which began in 2001 and was intended to “export democracy” to Afghanistan, seems less like another of history’s mistakes than a farce that never stood a chance, just as communism in Afghanistan would have eventually gotten nowhere. What Charlie Wilson did to help the anti-Soviet insurgency was one thing – his goal was to vex the Russians. To impose Western values on a deeply rooted Islamic culture feels like nothing short of folly, though there’s still no telling how many times history will need to be repeated before a bit of wisdom sinks in.

The enemy of one’s enemy can, in fact, be a friend, but usually just for a while — and some enemies stay enemies for life, with no side destined to win in absolute terms.

Perhaps the greatest irony of the 1989 Soviet withdrawal, which represented that revolutionary state’s darkest hour, is that within 18 months there would no longer be a Soviet Union.

Charlie Wilson saw a problem, or what for him was a problem, and set about trying to make it right, at times bypassing normal channels. His was a little victory.

As for bigger victories, the kind in which peoples are spared from the worst among them, those are harder to engineer. Even with Tom Hanks on your side.