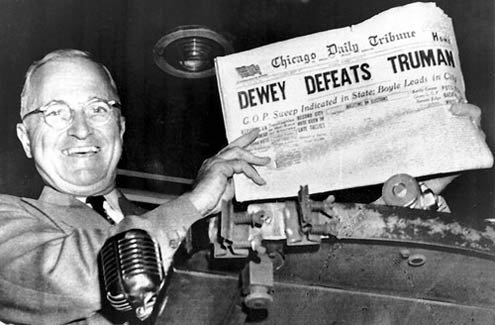 ewspapers are dying. Their fate recalls that of transatlantic luxury liner travel in the decade between 1955 and 1965.

In 1955, Atlantic air travel was promising but still cumbersome: flights between New York and London involved at least two stops (usually Gander and Shannon) and a day of travel. But between 1958 and 1960 came regular nonstop jet service.

Within five years the beasts of burden that had trooped back-and-forth to Europe for a century were being deserted en masse in favor of noisy but disingenuously promoted jets.

By 1975, the liners were gone. Most were scrapped. A few became feeble cruise ships. The hub ports of New York, Southampton, Bremerhaven and Le Havre lost their folklore.

The cautionary tale suggests the obvious: No medium of transmission or travel, however ingrained and grand, is immune from swift substitution.

Newspapers are poised on the brink as liners were in 1960, big intimacies at risk of extinction.

There is always a cost.

Jet travel not only abbreviated distance, putting a premium on swiftness, but also refuted the need for a sensibility that deliberately imbued gradualness and patience with elegance. Rushing became a rival virtue.

But quickness for its own sake was soon exposed to lack style, mostly because style begs details that in turn demand time. The paradox was humbling. Rushing as an asset soon revealed an endemic dark side, the human stress over failure keep up.

Now newspapers are being left behind.

Their desertion reflects both the public’s direct Internet investment and a desire to bypass all filtration. (Network television may follow.)

The New York Times‘ motto “All the new that’s fit to print” — established during the ocean liner era — presumed the curious public would always need (and want) a class of news-framers. Deep limitations in basic education made their skills vital. But those limitations have since been overturned.

Online delivery has zoomed past all filtering paradigms, or skipped around them. No longer hemmed by conventional journalism, citizens are establishing a new and highly personal perimeter in which news is a kind of audio-visual astrology that includes data, rumor and bias.

This stabs deeper than the jet analogy because it represents not only the introduction of a more efficient means but the overhauling of travel itself. People not only have the jet but can also fly it. Pilot training demands few basic skills. Once learned, the citizen is master and commander.

The advantages of unfettered self-publishing is obvious: Voices proliferate alongside a liquid amalgam of the cultured and the licentious. The explosive volume of sharing, some of it sweetly generous, some less so, is overwhelming but rarely dull.

Staid by contrast, newspapers were implicitly tasked with cultural literacy. They contextualized, ordered, established priorities and trained insiders to conjugate presentation. The eclectic was built into a framework. Effective investigative journalism often took years to develop.

The predictably out-of-breath Web instead gets context and conceit from personal preference. While the onerous newspaper filtration system focused intellect, and often surprised it, the Web’s superb selfishness paradoxically hands out blinders. Hyper-localism and casual internationalism is by nature markedly parochial.

Stephen Berlin Johnson, a supporter of the Web and the so-called “news ecosystem,” spoke to this recently. “I adore the ‘City’ section of The New York Times,” he said, “but every Sunday when I pick it up, there are only three or four stories in the whole section that I find interesting or relevant to my life — out of probably twenty stories total.”

Online life makes the subjective into the norm. That such a reliance is a risk to social modesty dawns on no one because modesty is yet another casualty.

Newspapers existed in part so that Johnson and others like him would get not only what they thought relevant, but also be exposed to “irrelevancies” helpful to building an informed and objective world view, one that might put Mugabe and Mac in the same sentence. A newspaper was a kitchen in which local, national and international were garnished and served.

The elimination of filtration framework in favor of indiscriminate pluralism and hyper-global chat is no longer debatable: It’s happening. The larger question is whether this dismantling represents a dietary advance or another fibrous convenience, or if in the postmodern world the two are indistinguishable.

If the latter, where do standards fit in?

“There are vastly more options to choose from, and of course, there’s more noise now,” says Johnson of the Web, bemoaning “lame rumor sites that just make things up with no accountability whatsoever.”

The paradox is that newspapers existed at least in part to rein in “lame” rumor, restrict gobbledygook (such as “vastly more options”) and help prompt an intimate and universal sense of accountability.