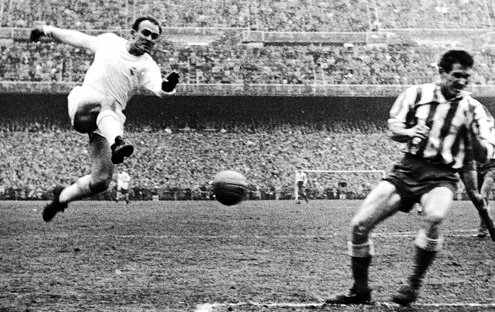 nother season, another acute striker shortage at Arsenal FC. The Gunners’ stubborn manager Arsène Wenger once again failed to sign the kind of goal-scorer that can propel the London side to an elusive Premier League title. In a recent interview, the Frenchman defended himself against the familiar press barbs and the Arsenal faithful by saying that “Europe doesn’t produce strikers anymore.”

With an economics degree from the University of Strasbourg, gangly mad-scientist features, and a proclivity for pedantic discourses enunciated in a heavy French accent, Wenger is an easy target for results-obsessed fans with short memories. He led Arsenal to two titles in the 2000s, including an unprecedented undefeated season, but league and European titles have eluded him this decade. “Today,” says Wenger, “the value of a player depends on the identity of the buyer only. If a small club goes to buy the same player, the price is divided sometimes by two or three.” A big club, Arsenal has refused to pay above market value while its competitors overpay, according to the manager.

This summer, the striker shortage that Wenger has so often lamented in recent years seemed ubiquitous in the world’s richest league. Chelsea, Manchester City, and Manchester United each deploy one starting striker in their preferred formation, and have scant cover should their first choice — Diego Costa, Sergio Aguero, and Anthony Martial, respectively — suffer injury or fatigue.

The case of 19-year-old Martial is an illustrative one. The French striker has made a dream debut for Manchester United, scoring three times in his first three appearances. A month ago, though, his arrival at Manchester United for the fee of £36 million ($55 million) — the most ever paid for a teenager – was widely panned as a panic buy. Manchester United, third-richest club in the world, had to overspend on a 19-year-old at the eleventh hour of the transfer window in order to get a genuine striker into the roster.

Extortionate transfer fees are one reason why even the richest clubs are willing to leave themselves thin in the striker department. But perhaps the more important reason for the chronic striker shortage is the evolution of football tactics.

It is increasingly rare to see teams deploy two strikers, with managers preferring instead a glut of technically gifted wingers and attacking midfielders capable of both pushing forward and tracking back defensively. Lone strikers must now possess the traits that two players previously embodied, creating a dearth of do-it-all strikers. The modern striker must be strong enough to retain possession and not be bullied in the penalty area, but also fast enough to make a run off the last defender’s shoulder.

That wealthy teams all possess an arsenal of attacking midfielders hasn’t diminished their cost. Manchester City spent a combined £100 million ($152 million) on Kevin De Bruyne and Raheem Sterling this summer, but didn’t put forward a dime for a proven striker to cover for the oft-injured Aguero and his replacement, Wilfried Bony.

The obsolescence of the traditional striker is even more acute in Spain than in England, and it has been the domination of Barcelona and Real Madrid that have promulgated shifts in style across the continent. Barcelona trademarked the fluid 4-3-3 formation that has been copied by so many of its rivals. None of Barcelona’s three forward players, Lionel Messi, Neymar and Luis Suarez, are traditional strikers. Instead they overlap and interchange with one another, much as they do with the rest of the team. Barca’s opponents have found out quickly that employing two strikers against a team that can attack you with 10 players is suicidal.

While Real Madrid use Karim Benzema up front, he’s not an archetypal in-the-box striker. Worryingly for los blancos, they lack anyone on their bench to replace him.

It seems that the only major league resisting the trend is the Italian Serie A. While Roma and Napoli have adopted a Spanish, or a Catalan, 4-3-3 over the last five seasons, a slower game still prevails in Italy on the whole. Patient build-up play lends itself towards a traditional inside-the-box poacher and interplay between multiple forwards. Clubs up and down the standings, including Milan and Juventus, employ two strikers. Inside-the-box grafters like Luca Toni, Alberto Gilardino, and Marco Borriello find themselves the wrong side of 30 but in important roles with their clubs. The first two were Italy’s main strikers during its triumphant 2006 World Cup campaign, when Messi was just a promising teenager. Toni, now 38, was remarkably last season’s Serie A joint top-scorer with Verona.

For non-Italian strikers in the traditional mold, Serie A has served as a refuge where other leagues have rejected them. Miroslav Klose and Mario Gomez came from Bayern Munich to Lazio and Fiorentina, respectively, after they became incompatible with Bayern’s slick and high-octane style. Mario Mandzukic is a player that has scored 45 goals in the last three seasons between Bayern Munich and Atletico Madrid. But his anachronistic style as a tall and physical striker left him on the margins at both clubs, with Juventus happy to take him in.

With the world’s game growing increasingly uniform each season, it’s important to cherish these players, the ones that modernity has cast aside.