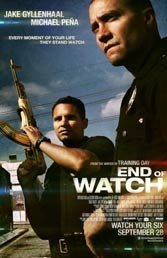 Writer-director David Ayer goes where many men have gone before, into gang-infested L.A. among hardcore cops. So there’s no novelty there, aside perhaps from copiously kinetic amounts of hand-held camera work coupled with the idea of 21st-century cops and gangs filming themselves both at play and on the job.

Ayer’s strength has less to do with story-line, centered on the violence-afflicted days of two L.A. patrolmen, white and Hispanic, that how his two stars hone and maintain their buddy bond. The ever-reliable Jake Gyllenhaal is Brian Taylor, a wiseass former Marine with a conscience, while the excellent Miguel Peña is Mike Zavala, his family-oriented, intensely loyal and often ferocious Mexican-American partner. Together, they ply familiar gang-infested waters whose hues and noises Ayer takes to heart (the two major “food crops” are money and guns). But Jake’s good-guy resolve inadvertently leads the partners into cartel waters, turning smalltime madness into big-time mayhem. In the midst of this, Ayer attentively tracks the personal lives of the men: Miguel happily married, Brian gradually falling for the love of his life (Anna Kendrick as Janet).

Gyllenhaal and Peña are locked into character throughout, and despite uneven pacing the film’s adrenaline level never flags. It does bear pointing out that American television, particularly with cable dramas including “The Wire,” “The Shield,” and “Southland,” has diligently covered lots of this F-word-rich territory already, and often more cogently. Nor is Ayer a stranger to the genre, writing dirty cop movies “Dark Blue” (2002) and Antoine Fuqua’s “Training Day” (2003), which earned Denzel Washington an Oscar.

Though Brian and Miguel constantly pledge allegiance to each other, Ayer only hints at what makes them tick, something that the non-plot plot does little to improve on. Credit Ayer for sincerity, realism, and a few good one-liners, but much of the film’s dramatic force is undermined by the distracting jitters that hand-held cameras exist to produce.