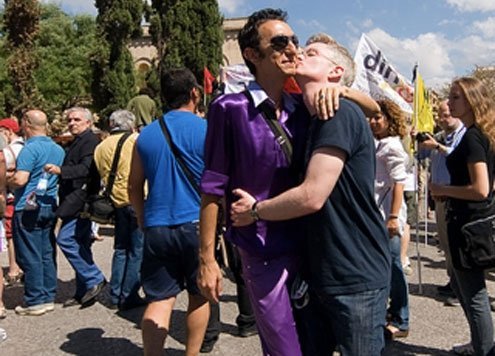 n May, Alberto had a medical congress in Sicily, so I went along. Sicily has fantastic food, breathtaking vistas, and above all wonderful people who seem truly eager to talk to you. Sicilians also know what not to talk about. It’s a pretty safe bet the silent list includes religion, politics, crime, and homosexuality. Prudence led me to keep my eyes and ears open and my mouth shut.

Just outside Taormina, we stopped at a service station, where I decided to check out the men’s room for graffiti. According to the wall scrawls, two people were offering oral sex and four more wanted sex with heterosexual couples. At least two were honest, or so I thought. I then ducked into the women’s washroom: nothing.

In Taormina, while Alberto attended the congress, I walked along the beach where it didn’t take me long to find the gay cruising area at the very far end near a wooded area. I found little piles of cigarette butts, used condoms and tissues — not exactly environmentally friendly sex. It was still early in the day and aside from one or two older guys in cars hidden among the trees, nothing seemed to be happening.

Next came Siracusa. By evening we strolled along the cobbled streets with Alberto’s hand over my inner elbow, as we usually do. None of the local Italian tourists seemed to notice or care. We came upon a group of five young Italians. Two boys were holding hands. As we passed there was a strange moment of acknowledgment, as if neither side knew whether to speak. One of the boy’s eyes fleetingly met mine and I smiled and nodded almost imperceptibly. He threw back a nervous little grin.

An elderly English couple passed, stole a look, pursed their lips, straightened their backs, and walked on as if they hadn’t noticed a thing.

“You’d think the Queen had just farted,” I told Alberto.

A little later, we passed older German tourists who gawked at us as if we’d violated a European Union touching code. Verboten!

Before bed, we stopped in a little grocery store at closing time. Taped on the wall behind the cash register was a sheet of paper that read, “We support the struggle for the rights of homosexuals. Equality and freedom for everyone.” The cashier said I could take a picture of it. We left smiling.

On the walls outside the shop was violent anti-abortion, anti-left, anti-gay graffiti. We stopped smiling.

Two days later came Catania, which we reached on the city’s notte Bianca (white night), an Italian equivalent of 24/7, only that it’s one day, once a year. The streets were full, the stores open. After two hours in bumper-to-bumper traffic Alberto finally found a parking spot. Ditching the car, we headed for an outdoor table at the nearest coffee bar where over iced coffee we watched freshly showered people stream down the street in front of us. Women in tight skirts balanced on impossibly high heels walked in jerky chicken steps beside men in baggy jeans, bicep-enhancing T-shirts and pristine sports shoes.

On the far side of the street, I noticed three young women in their early teens in wool plaid knee-length skirts, long socks, sensible shoes and military looking shirts.

“Are they the secular girl scouts or the Catholic ones?” I asked Alberto. No answer. I shrugged.

But a few moments later they approached our table.

“Excuse me,” said one girl, “Can we interview you for our scouting project?”

“That depends on what you want to ask me,” I said flatly.

“We’d like to ask you about your attitudes towards homosexuals.”

I coughed a chunk of ice from my windpipe. From the corner of my eye I saw Alberto looking at me nervously. “Well,” I said, “I’m gay and so is my husband.” I pointed to Alberto.

The young women look back and forth quickly at Alberto and me, then to my ring finger, which I held up as proof.

“Oh,” squealed the spokesgirl, “how wonderful! Why did you choose to marry a man?”

I chuckled. “You don’t chose who you love. Love chooses you.”

I suspected the romantic experiences of the girls might be limited to Bieber-fever. “Alberto’s the person I fell in love with seventeen years ago,” I added, “and he’s the person I still love today.”

“What do you think about homosexual adoption?” asked the spokesgirl, reading from a printout.

“We’re in favor of it. But we can’t adopt in Italy and it’s too late for us now anyway. We’re too old.”

We chatted briefly until the girls thanked us and excitedly skipped off down the street. I leaned over to Alberto and said, “There’s so much more I wanted to say, but I didn’t want to give them a lecture.”

“Oh I think you gave them more than enough to think about,” Alberto said.

Later on, after I thought it all through, I realized that even in Sicily the silence is lifting.