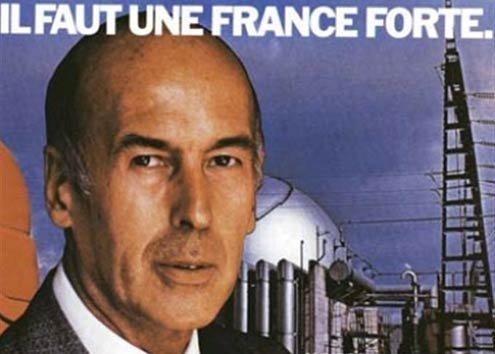 Giscard: The first-round winner was considered aristocratic and aloof.
T

he French president was haughty, or so we were told. In Italy to visit his aging counterpart, he was late by an hour to his Rome press conference but failed to apologize. This, said my veteran colleague, was typical. “He feels like it is your privilege to be here.” Italy, the president began, was a great friend of France and a key European state that stood for democracy and liberalism. Ties between the two countries were excellent.

These short and innocuous remarks were followed by questions, which, as always with the talkative Italian press, included mini-speeches by the journalists.

With the French president soon facing re-election, the tone was often edgy.

Why, he was asked, was the French economy worse off now, deep into his term, than before he’d taken office, with Germany comfortably in the European forefront?

The journalist was mistaken, replied the president. France was every bit as strong. Its suffering, he said, was part of a more general European weakness that no one could or should place on France’s doorstep.

Next up were Anglo-French relations. Did the president think that tension between Paris and London had exacerbated the overall European scenario?

The president, looking away from the journalist, replied: “I do not know why certain people like yourselves feel that this is a purely Anglo-French problem.” Europe was a collective entity, he said, with each state expressing an opinion. Occasional disagreements were normal.

The journalist shot back, objecting to the phrase “people like yourself.” The “people” to which the president referred were not journalists but ordinary citizens, said the journalist. The president said nothing.

A French reporter asked about economic restraint, which had so far produced few concretely favorable effects. Austerity measures first introduced by his prime minister — including luxury taxes and brief freezes in consumer prices — while intended to stimulate employment and curb inflation, had accomplished neither end. What would be his next step?

Speaking of the election, asked another journalist, how did he regard the “threat” posed by the Socialists, which had made steady advances? Did he see the left’s collective power as a risk to winning a second term?

The left, he replied, did not have France’s interests at heart, and their programs would be systematically rejected in any general election. The French people did not believe in “government by collective,” which made his re-election campaign the only valid one in France.

But the left, the reporter parried, had promised to limit the pattern of layoffs and control austerity as it affected the least entitled. Perhaps, the journalist added, the president was himself too entitled to see the appeal of such an alternative.

The president smiled. “We have a Socialist speaker in our audience. Clearly they have the money to travel.”

A woman journalist, among the few in the audience, asked the president about his popularity. He was considered remote from day-to-day affairs, even regal, she said. Would he work to soften his imagine?

There was no king of France, he replied. Just the office of the presidency, which he occupied, and if at times he seemed unpopular, it was the result of making decisions that were by nature unpopular. His enemies were determined to capitalize on this and to portray him as what he was not.

Would he apologize for his friendship with African dictators, some of them alleged to have overseen atrocities?

Apologies on his part were not necessary, he said, nor in his nature. He would apologize only for his mistakes, and he had made none that he knew of.

Fifteen minutes into the delayed press conference, the French president nodded to his aid, put his hand over the microphone, and left the room without saying good-bye.

“He thinks he’s beyond reproach,” said my journalist friend. “He thinks he descends from Charlemagne and can behave as he wishes without consequences, which is probably true in Italy.”

I left the press conference, my first with a head of state, questioning the advisability of public swagger. But I also wondered if France, which coveted nationalism and continuity of leadership, would evict an incumbent president in favor of the Socialists — the beaten party of seven years before — and their leader, a middle-aged figure already criticized as a “man of the past.”

Less than a year after the Rome press conference, in May 1981, I got my answer. The confident and conceited French president, Valéry Giscard d’Estaing, while winning the first round of national voting, was decisively beaten in the second and deciding round by the “man of the past,” Socialist Party leader François Mitterrand. Giscard issued no congratulations. Mitterrand would serve two seven-year terms.

Since then, writers have often zeroed in on Giscard’s seemingly preternatural unwillingness, or inability, to make himself liked. History can be disquietingly repetitive, and the word for what may lie ahead for France is appropriately French: encore.