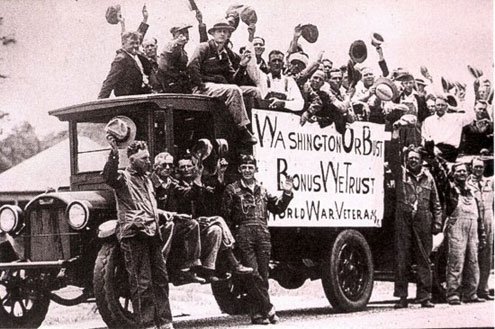 t was December 1968 and I was on waning side of childhood. Our Christmas tree was just up. Velvet curtains in our colonial house in a small Midwestern city defended our Williamsburg-yellow living room from winter cold and dark. Pine perfumed the air. Eggnog clung sweetly to the palate. While we sat in front of the fire, a woman sang on the Victrola: “Toy land, toy land/Little girl and boy land/While you dwell within it/You are ever happy then/Childhood, joyland/Mystic merry toyland/ Once you pass its borders/You can ne’er return again.”

My father began to cry, overwhelmed by a stiff emotional cocktail brewed from many other Christmases, less happy and safe.

My father was a gifted and sensitive storyteller. Even if I listened well, there was much I did not understand. I was too young to know what questions to ask and now he’s gone. But here’s what I did get.

“Toyland” was released in 1932, when my father was 14. Even at my young age, you knew what 1932 meant. In our post-2008 world, it’s the Crash of 1929 that gets attention, but it was only a warm-up. It was 1932 that fully revealed the depths of economic and psychic damage still unequalled in American history.

The year marked The Depression at full-bore: 1,493 banks failed; 43,000 unemployed World War I veterans marched on Washington — the so-called Bonus Army — and set up camp. They were eventually dispersed and fired on by U.S. cavalry led by Army chief-of-staff Douglas Macarthur with support from two majors named Dwight Eisenhower and George Patton. An unknown number were killed. A “chicken in every pot” was just campaign slogan and Franklin D. Roosevelt was only an untested hope (or, as my father’s family saw it, an East Coast aristocrat and people-pandering demagogue…).

People my parents knew had jumped from buildings after losing both their own money and those of others. From their nice homes, my parents watched while their neighbors’ furniture went under the hammer on the front lawn. My father affected the tough ways of the truck-drivers at his father’s Grand Rapids, Michigan dairy. He was ashamed to be the boss’ son; ashamed that his family could afford restaurants.

But 1932 was not just a national watershed. The year my grandfather brought home “Toyland” he did not stay to listen or celebrate. He had left the family for a girl who worked in the dairy. Or maybe he had returned home after the affair with the girl from the dairy. In any event, Christmas 1932 closed out my father’s childhood and “Toyland” was the song that ended it.

It’s surprising how the Depression and World War II remain present in the collective emotional iconography of Christmas. If the Victorians gave us the heartiness of Jingle Bells, Santa Claus and “Yes, Virginia…” and the lusty joys of material expansion, the Depression and World War II came back with “It’s a Wonderful Life,” “White Christmas,” “I’ll be Home for Christmas” and “Have Yourself a Merry Little Christmas.”

We still watch and sing these, hoping to see reflections of ourselves in their pictures of struggles to maintain ideals, dignity and joy in the face of national tests tougher than any we face today. We watch and we forget the reality of those times — George Bailey and pre-FDIC banking or GIs hoping to be alive for one more white Christmas. If only we’d heeded some of their lessons about year-round, Christmas-like consumption fuelled by too-easy credit. Or an awareness that busts follow booms.

While my father’s story didn’t exactly end my childhood, it clouded my 1968 residency within “Toyland’s” reassuring borders. I became acquainted with the secret struggles of parents, of their marriages, of their passing lives. It revealed the lands that lay beyond Toyland’s borders, where adults spoke a foreign emotional language.

Just now, while seeking answers I missed in 1968, I turned to the only resource left, the Internet. “Toyland” was apparently released 1934, not 1932. Other facts and dates from my father’s life were also off, including the year of the dairy girl escapade (there were several). Tested by facts, my own memories wobbled. Personal and historic watersheds blurred. The scene I recall could not have happened in 1968. In that year, our living room was still painted green. The velvet curtains came only in the 1970s.

I was recently struck by a passage from “One Man’s Bible,” a book by Chinese Nobel Peace Prize winner Gao Xingjian: “Remote childhood is hazy, but some bright spots flare up in memories. When you pick one end of a thread, memories… gradually appear, and like a net emerging from the water, they are interconnected and infinite. The more you pull, the more the threads seem to appear and disappear… Human life is a net, you want to undo it a knot at a time, but only succeed in creating a tangled mess. Life is a muddled account you can’t work out.”

Or as the Christmas song says: “…if the Fates allow,

From now on we’ll have to muddle through somehow.

So have yourself a merry little Christmas now.”