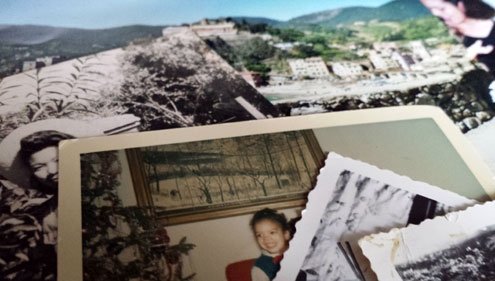 Old family photos given safe passage in a homely, but sturdy trunk.
S

ometimes it’s wrong to throw out old stuff, he says, as I dig through the trunk that has followed me across an ocean three times. This latest move, from one place in Rome to another, is roughly the twentieth for that piece of luggage, and one of the shortest. My first big move as an adult took me from New York City to graduate school in California. My sister was with me as my belongings were deposited on the sidewalk near the dorms at Stanford. For her, it was a brief vacation from medical school. For both of us, it was an adventure.

We were two arrivals from Manhattan, immensely pleased with that wide, sunny place south of San Francisco, where young men wore fisherman’s sweaters with Bermuda shorts and flip flops. Up in the big city, out on the water, we oohed at our first sight of San Francisco’s mythic fog, sliding down over the hills and buildings, making its appearance before an expectant public. Milky molasses tipped out of a large vat in the sky.

California marked a brief period when both of us were adults, yet still in school. With five years between us, we were, for the first time, something akin to contemporaries. She was on her way to becoming a physician, a wife, a mother, a transplant to the Midwest; I was on my way to a lifestyle that would have me perennially in transit. In cars and vans, helicopters and planes, aircraft carriers and that tail-hook jet that knocked the wind out of me as it catapulted into the sky. There was no way to prepare you for that first time, the Navy man said later. He had given us helmets, belted us in and counted us down to take off, but I still hadn’t understood that it would feel like a collision, that first release from the tether.

Sometimes, he says again, it’s wrong to throw out old stuff, as I choose things to donate. But I couldn’t have managed, I reply, if I hadn’t learned to trash, to donate, to gift, to sell. Three times, I set aside that jeweled dress that I wore to a long-ago event. Three times, he put it back, stuffed it in the closet while I wasn’t looking. There’s nothing wrong with keeping something if it reminds you of a time, a person, a place, he says. I sit on the floor, glum, the times, the persons, the places, piling up.

Material things. Life beats material things every time, but not all things are created equal. Some are markers of our times and relationships. Before the age of the selfie, there were only paper photographs and desperate families searching through rubble to find even one. This thought stays with me from my early days as a journalist, from those first intrusions into other people’s lives. People who had been lucky enough to survive a disaster, or unfortunate enough to have lost someone to an act of violence. Searching for a photo could help them to ease the distress. Not finding it could drive them to the point of madness.

That trunk is a survivor. It resisted an earthquake that smashed everything else in the room and, soon after, it followed me to Italy for the first time. Since then, it has stored computer equipment and concert programs, running medals and love letters, tax records and other things, some less useful than others. Like the ceramic savings bank made for me by an aunt, a little guard with yellow hair and a coin slot in his helmet. Or the piece of black chiffon, hand-painted by my father. It is folded, unused, but untrashable.

Like my old journals that surfaced in this latest move. Like the written down experiences that have marked me for life. That first view of the Grand Canyon, the hike down into the bowl. A night of rioting in Los Angeles, the events that spurred the unrest. The kidnap and rape of a friend, the circle of women who sat with her after. For some things, there are no words. For some, you wish there were no words.

There are people who have nothing, I tell him. I can do with less. But of course, I still acquire. More items I will later exorcise from my life. Before this latest house change, a friend eyed the trunk and said, and that? It’s that kind of trunk, not beautiful by any standard, not vintage anything, with the kind of surface that you can wipe down with Windex. Our home is small, I say, the trunk is useful.

One day, I say, I’ll no longer need it, that beaten-up trunk in the corner of the room. But perhaps, I always will. The trunk, itself, has become a marker of time and relationships. A material thing, a homely-looking thing, but an invaluable thing.