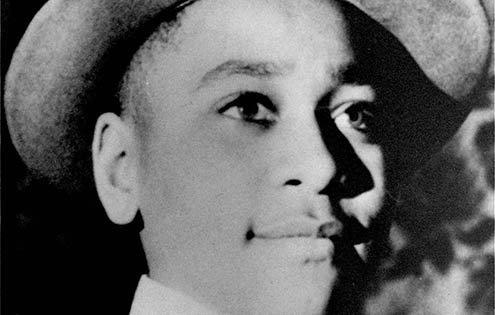 Emmitt Till visited his Mississippi family from Chicago in 1955. He returned home only for burial.
A

ll my powers of expression and thoughts so sublime / Could never do you justice in reason or rhyme / Only one thing I did wrong / Stayed in Mississippi a day too long. • Bob Dylan, “Mississippi”

The month of May marked the 60th anniversary of Emmett Till’s murder. Six decades ago, 14-year-old Emmett traveled from Chicago to the Mississippi Delta to visit his family. While on an excursion with his cousins in August 1955, he entered Bryant’s Grocery, a convenience store in the small town of Money, Mississippi. Foraging for bubble gum and candy, Emmett apparently made the “mistake” of whistling at the white female clerk, a mistake that would cost him his life.

Exactly what happened in the store has been debated for decades. Days later, Emmett was kidnapped, tortured and lynched, his mutilated body dumped in the Tallahatchie River. Police found his muddy remains three days later, with grotesque images of his corpse making both national and international rounds.

The shop owner’s husband, Roy Bryant, and his half-brother, J.W. Milam, were charged with the murder and tried in nearby Sumner, Mississippi where an all-white, all-male jury swiftly acquitted both men, accepting the defense contention that the disfigured body wasn’t Emmett’s.

The courthouse still dominates the town square in tiny Sumner, population 400. Tallahatchie County considers itself a “Free State,” a Tea Party inspired Southern form of social organization that resists national regulation in favor of self-governance. In 2009, County Attorney John Whitten III organized a vigilante group (a literal lynch mob of law enforcement officers, K-9 units, an armored personnel carrier, and some drunken friends) to chase down a black youth alleged to have burglarized local homes. There was no evidence, no warrant, and no legal protocol. Still, the lurid posse, led by Jeep-driving, pistol-toting Whitten, fired off rounds in an empty field.

This happened in the same Tallahatchie County that in 2007 officially apologized to the Till family for a “terrible miscarriage of justice” and spoke of the “power to fulfill the promise of ‘liberty and justice for all.'”

Walking through Sumner’s town square, I see a man in a Mississippi Department of Corrections shirt and green-striped pants. His name is Leonard. He’s middle-aged and sports a “DON’T KILL MY VIBE” hat. Every morning the court’s in session he hammers a “Reserved for Judge” sign into the ground to make sure parking justice is served. Leonard is a state convict, trustee of a workforce program that tasks him with maintaining the grounds of the courthouse and the surrounding area. A black man jailed on a drug charge almost a decade ago, Leonard spends almost every day of his week power-washing a Confederate memorial, wiping down an Emmett Till historical marker, and waxing the floors of the courthouse that exonerated white men of a premeditated, racist murder.

In this setting, where the horrors of Jim Crow laws should be palpably part of the past and remembered only through historical markers, Leonard testifies to the persistence of laws applied differently to different groups.

In the aftermath of Hurricane Katrina, Leonard lived in coastal Gulfport while trying to create a janitorial service business he hoped would take off and help him support his family. He dealt drugs to get funding. “It was hard for me to find other ways to get money,” he tells me. “And you know how they run up on black people.”

He was caught selling and sentenced to 10 years “to the day.” Good behavior and rehabilitation leniency were ruled out. He’ll serve the full term.

Leonard has seen other prisoners come and go through the workforce program, many hoping to reduce their prison time. Leonard won’t get that chance. He won’t able to change the number of times he walks across the tracks from the black part of Sumner — where the jailhouse is located — to the gates to the courthouse, which he unlocks.

“They ask me if I want someone to help me cleaning the courthouse. I say ‘no, no, no’ because if they mess up that’s added time for me. And I don’t have more time.”

He counts down the days until he can rejoin his wife and three children. At the same time, he’s aware of the obstacles. He knows where he lives. He’s also aware of the unforgiving environment that led him to make his first set of mistakes. He’s determined not to repeat them.

The final line of Bob Dylan’s “Mississippi” is taken from a refrain that convicts in Parchman Prison sang the worked the fields. The prison is just few miles from Sumner and housed Leonard before he moved into the workforce program. “Only one thing I did wrong,” goes the Dylan lines, “Stayed in Mississippi a day too long.” Leonard can relate.