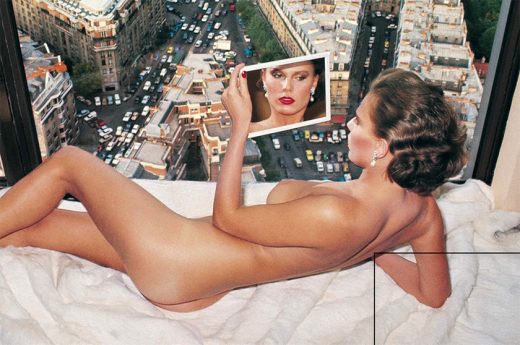 Detail from a Helmut Newton nude. “I like photographing women who appear to know something of life," the German-born photographer once said.
H

ow I came to be a London escort is much ado about a farm. Not a comfortably conventional opening gambit for an essay, I know, but someone wise once said the truth can set you free.

So here is the truth, or at least its first installment.

I am British. I grew up in the countryside. I dreamed of becoming an actress and attended drama school. I acted, Tennessee Williams, Shakespeare, Chekhov, but these great men and their plays do not pay bills. I taught school for three years. That, too, fell far short of giving me financial security.

Perhaps not short for the average woman, but you could not pay me to be average. I grew up in a beautiful setting, on a manor beside a farm. I had nannies. I had and have a horse. As a child, I’d drape myself in my mother’s old gowns and frolic in the woods while imagining a magical future.

Over the millennia, fascinating women, Anne Boleyn and Cleopatra among them, have induced men toward both patronage and rashness.

But a future is not a child’s to know, and whims can be capricious.

When your parents age and become ill, all slips suddenly into troubling flux. I realized my beloved farm, the centerpiece of my memories, was at real risk of being taken from us.

So I made a wild decision. Some would no doubt call it irresponsible or even immoral, but to me it wasn’t either of those things. It was a means to an end, and an adventurous one at that.

I traveled to America on a visa that didn’t allow me to work, but I worked anyway. I danced in Los Angles. I stripped in Miami. I nudged up to Las Vegas. I gave men the fantasy of a lifetime, or that’s what the smitten told me. I was Kiera Knightly on the flip side of conventional stardom.

Given my background, I felt like Vivien Leigh taking the road less traveled. Tomorrow was always another day, and rarely boring. I made 1K a night dancing. Men flew me to exotic destinations on private jets. I felt strong and beautiful, all the while ruthlessly determined to achieve my farm-driven financial goals.

The truth may set you free, but only in the most idealistic terms. A more unsentimental truth is that money sets you free, letting you get a real grip on your life. Not a full grip, no one gets that, but enough to feel you’re in control. Lie to yourself if you choose, but there it is, naked. And so was I. Very often.

Until the law caught up with me and this brave new age of walls and exclusion forced me back to England.

This was a blessing in disguise to some extent, since I missed my horse and I wished to be closer to my aging parents. I’d been away for three years.

I’d hoped to be in America for two more years. I had my sights set on moving to New York City, hedonism-central, where top escorts can make as much as 50K a month, a select few even more than that. Dream money. Farm money. Freedom money. (And please spare me any righteous indignation, since you, not I, elected the impeccable Donald Trump).

So here I am in central London, hustling to reinvent myself. I have a new website and I stoke a Twitter feed intended to make upscale men stop everything and get in touch. And men, wealthy men, do just that. Some days I’m swamped. Give a certain kind of man a chance to spend time with a young, stunning, and well-read woman, and very often he’ll do just that. He will imagine a princess — part his own fantasy, part what I’ve teased out — and the rest of the story unfolds accordingly.

Not always, of course, but payment is in advance, so I can always set something aside. To date I’ve received travel offers, gift offers (“buy anything you want at Bulgari and bill me,” said one, recommending a 25K pendant). I have overnight dates set up in the weeks and months to come. I have an immediate future that’s palpably rosy. And that future, for now at least, is in Britain, which is thankfully less sex-obsessed than the U.S., where female “hotness” is a commodity with all the subtlety of a brick.

If all this has unleashed your judgmental side, so be it. “Sex is sex and money is money,” says an escort whose values and approach I admire.

One man offered me travel, jewels and shopping. But he seemed also to want to own me, which I will not allow.

My story is about money, and the people I meet along the Route 66 I’ve chosen.

Who am I without this veneer?

Certainly not the same person I am on a date.

I’ve been told I look like Anne Boleyn, though I have no interest in following in her footsteps.

In company, I enjoy making a stylish impression, whether at Ascot, Henley or Wimbledon, the familiar English wind whipping amorously through my dark hair.

I am unfailingly polite. I do not gloat after beating you at Scrabble yet again.

I can be moody, contradictory, and reckless, but then again I’m not applying for sainthood.

I laugh with gusto.

I love Harry Potter stories and the sound of my father’s chuckle as he does crosswords (with my help). I love Gatsby, my horse, and want him to have a companion (another piece of the dream). I’m rather fond of the author who created his name, Mr. F. Scott Fitzgerald, whose glittering fictional Gatsby had all sorts of inner doubts but also loved life. Like me. On some days I do not do much more than make tea and curl up with the latest Murakami novel. I like story-tellers with something secret to tell. If I gave you a list of things that make me content, far from all the items would refer to 5-star luxury and being spoiled and adored – and I’m sure you recognize I’m fond of both.

Yet I’m smart enough to know good men, truly good men, won’t be there each time I beckon them. I take things a day, and a meeting, at a time. I’m not in charge of luck. The best I can do is be polite to all my suitors and do the math in my head.

Recently, a man proposed that I join him on a trip to Thailand via Dubai and added a promise of limitless shopping. I declined, which I would not normally do, because I sensed he wanted not to pay for me but to own me. And I won’t be owned by anyone.

How do I see myself in a decade? With a husband, a dilapidated mansion to revel in, four kids (yes), and some ponies for good measure.

Who the hell does this woman think she is?

To which I reply, with more confidence than you can possibly imagine: she’s a dreamer. And this dreamer likes words.

My stories will be many, and in different flavors. If I might make one suggestion, it would be this: Do not bet against dreamers. They might just be onto something.