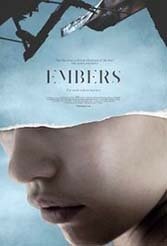 In Clare Carré’s plodding post-apocalyptic vision, both short and long-term memory has been canceled from the planet by a neurological virus The amnesiac survivors of her rustic, ruined landscape bump from person to person, event-to-event, incapable of remembering what happened hours, even minutes before. Lovers cannot recall each other after a passionate night. Vandals fail to follow through with violent acts because they forget their intentions midstream. Only one family, a father and daughter, are safe from this fate, contained in a bunker — a subplot Carré tries to milk for an inkling of dramatic tension.

Underneath the conceit of memory loss is a meditation on disconnectedness, estrangement, and randomness — the more sinister side of the expression “living in the moment.” The few inhabitants of this broken future are too befuddled by their condition to know much about what they once possessed, let alone moral direction. “Re-fire the neurons,” says one man, seeking a way to his previous, “but how?” Once Carré’s establishes her premise and deposits her vagrant characters, her narrative path grows more difficult. How to focus on wrecked people when they’re doomed, like Alzheimer’s patients, to forever go around in closed circles. The riddle isn’t solved, leaving an amnesiac premise stuck in moody, transcendental idle. In 2004, Peter Segal made “50 First Dates,” a gentle romantic comedy about a woman with short-term memory loss. Each second date was her first. That’s more or less the idea here, though far more ominously. If only the wheel didn’t spin so aimlessly.