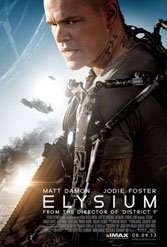 Neill Bloomkamp’s mediocre sci-fi thriller offers at least one novelty: a view of illegal immigration and health care that makes space into the cushiest place going. It’s the late 21st-century and L.A. is a teeming, burning wasteland run by gangs and policed by androids. But up above, in a rotating “habitat” known as Elysium, the moneyed few have their thriving (if indoor) lawns and luxurious garden parties.

Into this, “District 9” director Bloomkamp inserts Max (Matt Damon), a reformed grand theft auto dude who after receiving a lethal dose of radiation at an android assembly plant agrees to illegally download the memory of an corporate fat cat in exchange for a black market “ticket” to treatment on Elysium, the only place where healing works. What he doesn’t know is that memory can kill you.

After this, Bloomkamp slams head-on into bromide city: a human bar-code future, “droid-o-crats,” a wicked tycoon, a power-hungry lady president who happens to be French (Jodie Foster doing a poor reverse accent) and a ruthless mercenary agent named Kruger (District 9’s Sharlto Copley), who leans on his Afrikaans-tinted snarl. There’s also a lifelong semi-love story stitched in, and a leukemic little girl in need of an Elysium-only cure.

Start to finish, Damon does little more than go through the motions, as does Foster. Aside from his spin on migration and a portrayal of L.A. as a ratty South Africa township (something he knows a thing or two about), Bloomkamp offers only stale bread to a genre that depends on some kind of novelty. His last 30 minutes stall, leaving only droid-human combat, bad tidings for a bad president, a Kruger-Max showdown, and, what else, a brave new world.