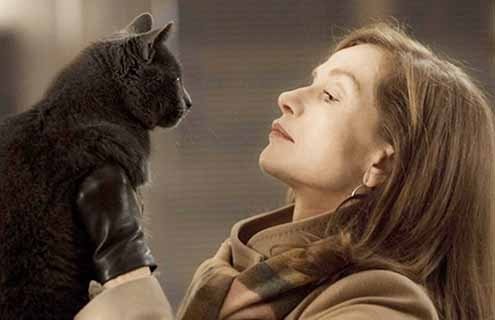 he film “Elle” is a remarkably complex and fascinating. Its underlying subject matter — rape, sadomasochism, and physical violence — will disturb some viewers and keep others at arm’s length. Those who turn away will miss a finely crafted mystery and an exceptional performance by Isabelle Huppert, who plays Michèle Leblanc as a deeply unlikeable heroine.

In the film’s harrowing opening scene, Michèle is brutally raped — a crime that is mostly heard but never seen. The backstory that purports to explain why Michèle won’t report the rape to police is that she was somehow entangled in a series of murders committed by her now-imprisoned father some 40 years before. She was 10 at the time of his crimes and police treated her not as a victim but as a suspect.

Yet nothing in “Elle” is quite as it seems. Michèle is a classic untrustworthy narrator. So much so that it’s hard to know what her role was in those old killings, just as it’s difficult to pick up on her feelings.

Though she sleeps with a hammer and carries pepper spray, she seems comfortable working in a home with large windows that all but invite intruders. In a late scene, she says, “I want to stop lying.” But how much of her life as she’s told it is a lie? Some of it, all of it, none of it, or is she lying about wanting to stop lying? “Elle” is morally ambiguous in spades.

Dutch director Paul Verhoeven, long known for violent films featuring manipulative women (“Basic Instinct” tops the list), portrays Michèle as a coldhearted businesswoman. Divorced, she lives alone with her cat, apparently without any need for genuine companionship. Her coldness extends to everything around her. It shows in how she reacts to the opening rape, how she treats her employees, and in the way she interacts with her mother. She denies her own maternal instincts, knowing that her best friend Anna (Anne Consigny) is more a mother to her adult son — the only innocent in the movie. Yet as reprehensible as she is, she’s also compellingly charismatic, a trait that helps her transcend the uglier moments she provokes.

Perverse sexuality courses through the story. Michèle and Anna are co-founders and co-executives of a company staffed by young males who create videogames designed to give men “a boner” (Michèle’s words). The company stages sexual assaults of women for use in animated games. Michèle’s aging mother Irène retains her own set of sexual appetites. Made “grotesque” (again, Michèle’s word) by cosmetic surgery, Irène nonetheless hires young gigolos to satisfy her needs. Time and again, Verhoeven underscores the sexual drive of his older female characters. The nature and volume of casual sex in the film set a standard for sexual “normalcy” that the unlikeable leading lady seems sure to transgress.

Huppert’s performance is richly subtle. Verhoeven often lingers on her face, and it’s a face that exhibits emotional context and change with the smallest of movements. Michèle’s psychological make-up and her sexual behavior evoke the psychological dramas of the 1940s and 1950s, with a nod to Alfred Hitchcock’s “Psycho.” But David Birke’s screenplay and Verhoeven’s treatment — the film is based on Philippe Djian’s acclaimed 2012 novel “Oh…” — eschew simple psychological explanations. Just what Michèle’s role is in her life’s drama, and who she is inside, remain unanswered questions.

There are many fine supporting performances, led by Laurent Lafitte as Patrick, Michèle’s neighbor, and Virginie Efira as Rebecca, his religiously devout wife. Both keep secrets that are disclosed only gradually.

Interestingly, Verhoeven originally considered making the film in English and setting it in Boston or Chicago. He finally changed his mind, unwilling to return “in the direction of ‘Basic Instinct'” to suit American audiences. Though not for all tastes, “Elle” is superb filmmaking.