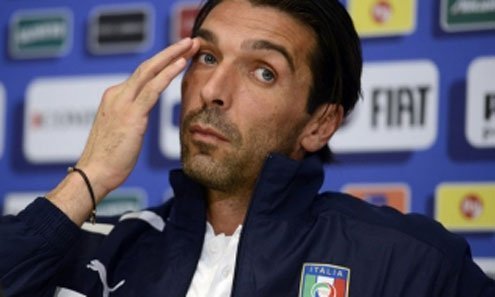 Gianluigi Buffon: "We were confronted with a hard reality, namely a team that was unable to score in its last two games and was justifiably eliminated."
I

n today’s sports world, winning and losing have disproportionate financial consequences. To lose isn’t merely to be shamed as a team or a nation, but also to potentially suffer an embarrassing descent into second-tier status. Italy’s swift elimination from the World Cup, an outcome parked somewhere between the surprising and the predictable, undeniably dents national pride — the country was also ousted early in 2010 — and will likely condition the way Italian soccer is viewed (and endorsed) in years to come.

But this is not about money or soccer or national pride. Instead, it’s about eloquence.

Time and again, Italy wins the eloquence World Cup without even trying. Its players, though mostly lacking university educations, are loquaciously alert. The grunted bromides or “awesome”-laced sentences spewed by many American athletes are not for the Italians — particularly when they lose. That’s when the poetic gift of disappointment and doubt seize language by the scruff and gives it a rhetorically mournful purpose.

Think about the last half-dozen television sports interviews you’ve heard and then consider the tone, nuance and directness contained in these post-game interviews with Italian goalkeeper Gianluigi “Gigi” Buffon, a Tuscan, and Rome-born midfielder Daniele De Rossi. Admittedly, some athletes are more expressive than others, and many are taught to dodge press questions or dissemble lest they misstate themselves or commit insensitive blunders — Tweets have proved a team sports hell, with inappropriateness run amok. That’s because team sports in particular (unlike Olympic disciplines) are chock with brilliantly gifted but verbally limited actors, their shortcomings unaffected by race, color or creed.

Here, in translation and in order, are what Buffon and De Rossi had to say after Italy was eliminated at the hands of Uruguay, following a cancellation by lowly Slovakia in the South Africa World Cup. The live comments by the two players contained no pauses, tangents or Italian equivalents of the English “you know.” They were made on the fly.

Buffon: “This day marks a failure. It’s a sad day for us as a group and for each of us. So, where exactly was this failure born? Who knows? We started off well. We developed expectations that might have been too lofty after the first victory [against England]. After that we were confronted with a hard reality, namely a team that was unable to score in its last two games and was justifiably eliminated. The referee? He didn’t help us out, for sure, but you can’t always go around blaming others.”

De Rossi: “We need to analyze what happened calmly and with clear heads. At the moment we risk underlining things that count much less than some may think. It’s important not hunt down alibis. There were details that played a role in how things turned out, such as the heat and the referee, but we shouldn’t fall back on them. We need to forget all this in a hurry. No, let me correct myself: We need to remember everything that’s happened very clearly and start from scratch as real men. And not like as caricatures or celebrities. The national team needs neither.”

“While it’s true,” De Rossi continued, speaking for veteran members of the team, “that we have the right spirit, it’s just as true that we’re always putting our reputations on the line. Those who don’t feel up to doing that, those who don’t possess the necessary passion, let them stay home.”

Buffon, 36, and De Rossi, 30, may have played in their final World Cup, suggesting this final remark was directed at underperforming younger players — and Italy had many.

Eloquence means the ability to express oneself in a way that reflects the occasion, whether the occasion is a success or a failure, a breakthrough or a calamity. It means focusing thought into sentences. It means effectively and persuasively conveying the meaning of an outcome, and sentiment about that outcome.

In that sense, Italy lost on the field but won in words, a frequent gap in the national psyche. If only rhetoric and deed aligned more regularly, in both governance and sports, the country might begin to regain its one-time grandeur.