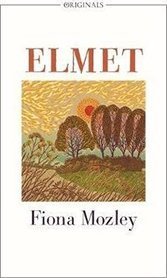 In her gripping first novel “Elmet,” British author Fiona Mozley pulls off an enthralling feat of misdirection. She introduces what seems to be a hard knocks pastoral — a feral street-fighting man building an isolated home in the Yorkshire woods for his beloved son and daughter — only to soon subvert the premise by adding a blood feud with a landowner that will turn the goings-on into an urban-style conflagration.

The narrator is 14-year-old Daniel, who with his older sister Cathy, live with their street-smart father John, referred to only as Daddy. He is part local enforcer, part “fight club” boxer for hire, part Dust Bowl-era father determined, says Daniel, “to keep us separate, in ourselves, apart from the world. He wished to give us a chance of living our own lives.” In this he will fail, for harm’s way is simply too wide.

Daniel is the opposite of his “gargantuan” father, soft, even feminine (“You have to appreciate that I never thought of myself as a man…”), while Cathy is a cunning, slim-boned warrior destined to become an avenging angel. The children are home schooled by the woods around them and made nimble by the need to survive. But skeletons begin to rattle, first that of their mother, who vanished; and then the appearance of ruthless local landowner Mr. Price, who once employed John to settle scores. A effort to give itinerant laborers greater clout against the likes of Price go well at first until the medieval enmity between Price and John give the story a thriller’s pace.

Mozley is a superb storyteller. She accomplishes her mood shift by leaving the narration entirely to Daniel, the youngest and least volatile of the cast, giving what’s to come a kind of naïve ferocity. Daniel’s narration is a flashback, as he recalls how he came to be who he is now — a wanderer in search of his sister.

In John and Cathy, Mozley has created credible male and female anti-heroes, and the way they interact as father and daughter, as well as toward Price, blurs morality, pitting a man who loves freedom against one who lives for chattel — “I used to own that man’s muscles, and I owned his mind,” Price says of John. John defection from this feudal status quo is unbearable to Price.

Mozley grew up in York and knows her once-primitive acres (“Elmet” was the name for the ancient Celtic badlands that once covered Yorkshire). She also knows the region’s tough economic arithmetic. This command permits her to get to the dark heart of noble intentions undone by class resentment and envy, sentiments that still lurk, prehistoric and indelible, in the British backwoods. Short-listed for the 2017 Man Booker Prize.