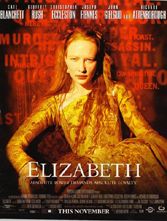 But the names exist only to serve Elizabeth, and Cate Blanchett demonstrates the mettle that makes her consistently top-tier. She shivers between passion and remoteness, particularly with putative lover Dudley. The French take a typically British beating, with Fanny Ardant behaving outrageously as Mary of Guise. Kapur’s movie limps to the finish line, but Blanchett doesn’t limp at all. (Interesting to contrast Blanchett’s performance with that of Helen Mirren, called on to do the 20th-century Windsor Elizabeth in Stephen Frears’ “The Queen”).