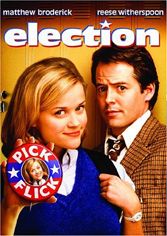 Alexander Payne (“About Schmidt,” “Sideways”) is a master of mischief and Reese Witherspoon born to play it to the nines. Witherspoon is Tracy Flick, an overwrought high school overachiever who’s had an affair with a married teacher (been there, done that) and now wants nothing else but to be class president. Ah, but there’s ethics teacher Jim McAllister (Matthew Broderick), who finds Ms. Flick insufferable and gets mindless football jock Paul (Chris Klein) to enter the “race.” Paul’s lesbian sister, to spite her brother, joins in the fray.

This is a wry satire on politics and vanity that snacks on good repartee and makes hay from secret attractions — to wit, McAllister and Flick. It’s that rare treat, the well-written comedy.