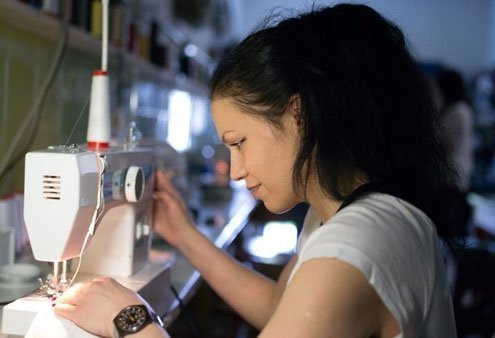 The Gomito a Gomito program is giving select prisoners a chance to shine. All photos by Jonatha Borzicchi.
I

t’s a sunny day when I finally gain access to the sewing lab. Shafts of light flood the room and the hum of sewing machines blends in with the chatter of young women. Music comes from a portable radio perched on a desk. The women inside — four of them — are busy working on aprons, hobo bags, tablecloth and small purses as part of a major order commissioned by IKEA.

Just the name of the Swedish corporate outlet store elicits pride. “It makes me think I can do something good, for once,” says 32-year old Francesca. An extra-large T-shirt and jeans hang off her skinny body, making her look older than her age. Francesca is serving a 15-year sentence for robbery.

The sewing lab is in a wing of the Penitenziario della Dozza, Bologna’s women’s prison, and the four women it employs are all inmates serving long-term sentences. “I like working on [the apparel] because it keeps me busy and gives me a sense of purpose,” Francesca says with a smile. She also earns a salary and learns vocation that might help ground her when she’s released. She has five years left on her term, depending on parole.

Prison guards carefully monitor my conversation. One playfully advises Francesca to go easy on swear words “if you can.”

“How’m I doing so far, ‘Assi?” she answers, using an off-the-cuff nickname for the assistant guard.

Both guard and inmate are about the same age and have southern Italian accents. Under different circumstances, they might have been friends.

“Giving inmates the chance to fill their time with satisfying and substantive work is part of the role of detention,” says Claudia Clementi, the warden of the facility, which has a population of 800. “The truth is we just don’t have the means to establish such programs, so it’s up to outside volunteers to provide the impetus,” she adds.

Italy’s prison system is both notoriously overcrowded and chronically under-funded, with negative media attention often focused on national facilities estimated to hold 140 percent more than their capacity (Italy has some 65,000 prison inmates, 2,800 of them women). In 2013, the Strasbourg-based European Court of Human Rights openly chided the Italian system, demanding reforms.

Many jail programs, including academic classes, depend on reaching gender quotas, since there are no mixed male and female activities. Bologna, which has some 70 women inmates, is beneath most program thresholds and often finds itself left out. The sewing lab is welcome relief from what might otherwise be a wasteland when it comes to available actives.

Known as Gomito a Gomito (“Elbow-to-Elbow), a play on words based on the forced proximity of jail life, the name is all the more poignant given the facility’s location on the city’s Via del Gomito.

A group of church volunteers from a local parish pitched the sewing lab idea three years ago. “I am not a believer,” says Enrica Morandi, the volunteer who supervises the lab, which runs four hours daily from Monday through Friday. “What I do believe in is helping others.”

Morandi is irrepressible. She calls me a week before my scheduled visit to push it by a few hours. “I have a doctor’s appointment that I’d hate to miss,” she tells me. Later, I discover the doctor’s appointment is a biannual breast exam. Doctors were able to stop her cancer early, she explains.

“It’s all routine,” she says, dismissing her medical history to focus instead on the activity in the lab. “Now then, check out this apron!” She holds it up. “You can wear it without having to tie it around you. It’s pure genius.

Her excitement is contagious — though of the four inmates Francesca is the only one willing to give me give her name. Another member of the team is serving time for drug trafficking. She’s also a talented artist, with her drawings displayed on the walls of the room. She hand-painted some of the prison-made items that volunteers sold at local markets before landing the IKEA commission.

“How did you learn to paint?” I ask her.

“I taught myself,” she says, staring me in disbelief, probably at the luxurious idea of art classes. The two other women in the Gomito a Gomito program are convicted murderers.

“None of the women chosen for the lab are in here for petty crimes,” says Clementi. “They need to be inmates who will be here for long enough that they can really learn a skill.” She pauses. “Something that can give them a second chance.”

Goods made by Gomito a Gomito inmates will be on sale near cash registers at Bologna’s IKEA outlet Friday through Sunday, April 11-13. Proceeds will be used to finance the project and pay the working inmates