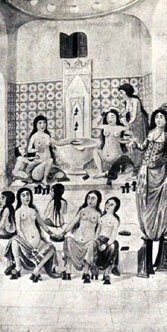 stood sopping wet, confused, lost, and unable to understand a word being spoken. I was also naked. That always helps.

Like all embarrassing moments caused, at least in part, by the sufferer’s own idiocy, it had seemed like a good idea at the time. I was traveling in Tunisia. In addition to visiting ancient ruins, beautiful mosques, seeing the Sahara, and trying out as many of the country’s purported 300 ways of preparing couscous as I could, I decided I had to go to a hammam.

A hammam is essentially just a steam bath. I knew this.

But I also knew that it was a particularly traditional and enjoyable way to bathe — depending on your point of view, of course. It usually included different pools of different temperatures, each with skin-cleansing waters and soul-purifying steam. Not to mention someone to scrub you down, someone else to massage you, a third person to crack your joints, and, at the end of it all, another helper handing you a lovely, warm towel. What’s luxury if it’s not paying strangers to manhandle your flesh?

I’d already failed in Tunis, where I’d hoped to visit the medina’s best-known hammam. My guidebook said it was open for women from 1 to 8 p.m. The man at the door said it was not. It would not be the first time that a guidebook steered me wrong in Tunisia.

Three days, 80 road-tripped miles, two ancient ruins, eight beautiful mosques and countless couscous disappointments later (of the 300 kinds alleged I experienced a grand total of one), I finally pulled into El-Hamma du Jerid. “Built on the site of a Roman thermal spa,” said my 14-year-old Blue Guide, “a brick hammam has replaced the original Roman baths where the sulphureous water, recommended for rheumatism and skin conditions, issues at 47 degrees Celsius.”

Though I sensed this wouldn’t exactly be a lilac-lotions-and-Enya kind of experience, I got out of the car, took a handful of dinars that I still didn’t know how to count, and walked to the bathhouse.

The young woman at the entrance had seen our out-of-place rental car pull up. It was shiny, with Tunis license plates; the non-donkey-cart look. Surprised, she still smiled and said something in Arabic. Embarrassed, I held out a palm of dinars. She gestured. I interpreted the gesture to mean the following: “You won’t have a place to put this money when you’re bathing, so give it to me and I’ll give you back the remainder, I promise.”

I handed over the money.

She led me down a dark corridor and down the stairs. At the bottom, I paused for a moment to let my eyes adjust. On my left, hooks hung with bags, presumably full of dry clothes. In the corner was an open shower. To the right, the bath.

The girl gestured to me to take off my clothes. When I turned back around, she pointed to the shower. Somewhat confused, I walked over. The shower was already occupied: A young woman shampooed her hair while a little boy, presumably hers, cavorted under the one stream of water. As I approached, she spoke abruptly to the boy and he moved aside. Self-consciously aware that I’d just stolen fun itself from a young child, I rinsed off. My hammam guide pointed to the pool.

That’s when I noticed that everyone else had oversized plastic pails filled with water, sponges, and soap. I didn’t. From everything I’d read, these items were provided. I felt like the kid in the cafeteria without the cool lunchbox. Except it was more like being the kid in the cafeteria without lunch: not only were the pails not provided, but there was no soap or sponge.

My guide had vanished.

I submerged myself and tried not to look like I was looking around. There were a lot of women, a lot of flesh, and a lot of long hair — the trifecta of Things You Don’t See in Southern Tunisia. I tried to relax. I tried not to think that despite all the effort I’d put into not being a straniera at home in Rome, here I was, purposely making myself more of a stranger in a strange land.

Around me, no one seemed to be relaxing. Instead, they scrubbed and rinsed — intensely. I tried to look less relaxed. Being naked, confused, alone, and with nothing to do, this was not difficult.

Two minutes later, I’d had enough. I got out and walked back to the shower, feeling the urge to rinse off that slightly murky green water I’d been so excited about. But at least I got water: The anticipated masseuses were nowhere in sight. Toto, we aren’t in Tunis anymore, I thought.

“What is your name?” asked a woman in the shower in near-perfect English. When I told her, she nodded, smiled, and waved her sponge and soap in invitation. With shaky shukrans, I reached for them — and before I could, she started scrubbing. Back, thighs, stomach. My face burned with that peculiar foreigner’s mix of shame and gratitude at the inclusion.

When I stepped out of the shower I realized towels weren’t forthcoming. Still soaking, I donned bra, shirt, and skirt. The hammam girl reappeared. Since I’d already proven myself to be a foreigner, I suddenly wondered if she’d take advantage of it. Keep the money. Laugh at me as I left.

Instead, she bid me goodbye. If humor existed in the traces of her mouth, I couldn’t see it. As I left, she handed me back all but a single dinar. The price not of being a foreigner, but of bathing like a local.