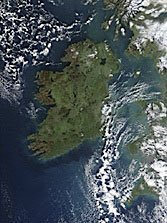 Being Irish is a delight while in Italy.
S

ometimes it’s pretty embarrassing being English. Well, quite often, actually. It’s an established fact that we are cold, unfriendly, drink too much, eat abysmal food, go pink in the sun, live in a country where it rains all the time, treated the people of India, the Caribbean and large parts of Africa shamefully and were largely responsible for today’s problems in Iraq, having helped forge artificial boundaries last century and followed George Bush into the Gulf War and George W. Bush into the present one. We’re not even any longer much good at cricket or rugby. And as everyone knows, because those annoying Italian TV correspondents reporting from the UK tell us so, we’re hopeless in bed, because we have an unhealthy attitude towards sex. “No sex please, we’re Breeteesh,” they quip, hilariously every time there’s a whiff of a sex scandal in British politics.

By contrast, it must be wonderful being Irish, especially if you happen to be in Italy. The Irish also drink too much, go pink in the sun and live in a country where it rains all the time. But they have lovely red hair, sing a lot better than English people do and were treated shamefully by the British. And they’re better at rugby too. The only people who may have some inkling of what it’s like to be universally loathed are of course Americans. They, like us, know they’ll be the first to be pulled off the plane and shot if there’s a hijacking. They eat gross food, and far too much of it. They will be single-handedly responsible for World War III when it finally breaks out. They invented McDonalds and Disney. And of course, they’re hopeless at both cricket and rugby.

So it should come as no real surprise to learn that a new UN report shows that the UK and the U.S. are also rubbish at bringing up children. The study puts the UK at the very bottom of an international league table examining the physical and emotional well-being of youngsters in the world’s wealthiest nations. But before you American readers start gloating, the overall quality of life for children in the United States was judged only narrowly better than in the UK, finishing 20th in the table of 21. Both the UK and the U.S. come way behind the front-runners of the Netherlands and the Scandinavian countries. But we also trail humiliatingly behind former East bloc countries Poland and the Czech Republic.

Despite living in the fifth richest country, the younger generation of UK citizens experience some of the worst levels of poverty, regard themselves as less happy, drink more alcohol, take more drugs, and have more underage sex than children in other economically advanced countries. They are also more likely to fail at school, experience violence and bullying and suffer a greater number of unhappy relationships with both their families and peers.

Italy, meanwhile, earns a very respectable eighth place, and comes top in the section that evaluates family and peer relationships (though it must also be said it comes second last in the education category). And Ireland, the darling of the European Union, is right there behind the Italians, winning ninth place and scoring even higher in the sections about subjective well-being and risky behavior.

Italian friends are always asking me why I don’t take up Italian citizenship, especially when I complain, as I am wont to do, when it’s time to file my tax returns, that I don’t even have the vote here. But although that would certainly make life easier in some respects — and probably rather safer when traveling by plane — I somehow feel it would be a cop out.

I’ve always found those English people who come over here to live and start waving their hands about in gestures intensely irritating. They’re almost as bad as the ones who keep slipping local idioms into sentences because they can’t remember the right words in their own language, or English women who wear dangly earrings and think they look as gorgeous as Italian women.

Like it or not, we are genetically programmed, and there’s no getting round it. That’s why I like Marmite on my toast in the morning and think it’s sick to eat biscuits for breakfast. It’s also why I feel a visceral need to have a cup of tea at around 4 p.m. every day, go pink in the sun, drink too much and am cold and unfriendly. As for sex, that’s my business. But between you and me, although I quite like rugby, I’ve never had much time for cricket.