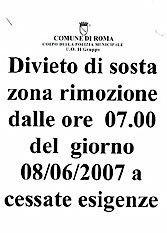 One hundred meters away, on the street, police spool duct tape and set up security checkpoints and barricades.
A

Below, in the garden sprawl beneath my window, a midday choral begins. These are Swedes at the Lutheran Church. The hymns arise from a wedding, bride and groom bashful on song-drenched grass.

One hundred meters away, on the street, police spool duct tape and set up security checkpoints and barricades. The American president will spend two nights in the lavish villa just beyond the Swedish chapel, the U.S. Embassy residence.

It is, to say the least, a provocative juxtaposition.

The singing Swedes wave. Their rite is inclusive.

The police are less forthright. Exclusion is their mandate.

The police will win this imagined skirmish, gradually emptying the neighborhood of song and citizens. They isolate parts of the city to keep the American president from harm’s way. Soon, wailing unmarked cars join in and predatory helicopters hover above rooftops, circling the city’s crumbs for clues.

It’s a time of war, of course, something easy to forget in a capital whose participation in the hostilities is tangential. Enemies — terrorists and dissenters — are allegedly everywhere at once. Alarmism is an enduring flavor.

This urban landscape serenades its own tartness. Since 2001, barricades have sealed off the U.S. Embassy in Rome. They’re are so ingrained — deferred to as sacred objects — that it’s hard to imagine anyone ever returning to the pedestrian walkways. Thresholds have been breached only to yield more forbidding ones, with little thought given to the long-term consequences. Security’s segregations are unquestioned. Hands-on is the rule.

The American president, in Europe briefly, is whisked from locale to locale as if wrapped in a rug. The rug is unrolled only for vetted dignitaries. Contact with local citizenry is considered folly. In fact, security and segregation are now synonymous, the former washing stigma from the latter.

The knee-jerk formula reinforces apprehension, which in turn begs protection, that feeds on threats (real, stretched, or imagined), that further distends the distance between governors and the governed. At best, it’s an unhealthy merry-go-round. At worst, it’s demoralizing.

John Kennedy’s most daring, memorable moment occurred when he second-guessed the primacy of distance and transcended it. In 1963, he drove, waving, to Cologne, then Bonn, finally to West Berlin, where he made his famous “Ich bin ein Berliner” speech. “In Cologne itself he drew a crowd of 350,000,” reported The New York Times. And later: “All this about 20,000,000 West Germans watched on TV.” A few days later, he mingled with Irish crowds in Cork.

It’s true, decades cannot be compared or casually overlapped. Relativism is dangerous. But to insist that post-9/11 days are more fraught than those of the Cold War underestimates the remorselessness of nuclear fears that made the 1960s so intellectually and creatively fertile, volatile.

Kennedy’s Berlin foray, while underplayed in the United States, won him the good will of Western Europe. He realized a larger-than-life physical presence. Five months later an American murdered him in Texas.

The danger of using security as a shield against public contact is that it’s habit-forming. The American president, popular or less so, can develop an attachment to a permanent barricade behind which he or she can always retreat. When public appearance is risky, reason recommends exclusion as an appropriate response.

But if secured segregation for the public good is normative, where does that leave the actual public, approving or enraged? Where’s the democratic give-and-take if ruled by helicopter? Yes, a war rages (an unpopular one in Europe), but who’s to say that facing a foreign crowd might not generate a Kennedy effect: The attachment of policy to a face, not merely to one of many Hollywood caricatures. But it’s a non-starter. Officially, boldness equals Pollyanna naïveté.

Union arises first from some form of voluntary communion, a physical shuttle between rulers and ruled. Otherwise political power suits arrogance’s many clichés and the public trust is little more than an abstract protocol rightly lampooned by cynics of democracy. Popularity forgoes its physical dimension, which erodes its sentimental one. The popolus is asked to matter only when called upon to vote. It’s a functional but uninspiring model.

There’s never been a time when American presidents cavorted in their own streets, let alone in those of a foreign capital. There have, however, been presidents who understood “the vision thing” — something the first George Bush was said to have lacked, costing him the 1992 election.

Now, vision is limited to snipers and helicopters, to ways of fending off intruders. Threats cannibalize their own rumors. We’re in an epoch in which the defensive imagination deters progressive instincts. In that sense, it’s not entirely different from the one Kennedy inhabited and tried briefly to redefine.

Against advice, Kennedy got in a German car, made a speech, demanded and received public reckoning. Hearing hymns, he didn’t shy from them, or accept the security a bunker affords. Instead, he participated astutely in the chorus. Popularity as he knew it depended on consensus, and consensus demanded considered risk. Otherwise you lost touch with the public, and forgot its needs.