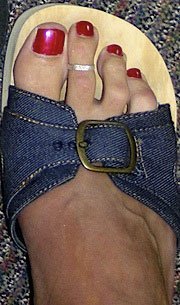 For Luigi, it started with the painted toenails…
M

ale hair maintenance as a cultural indicator has yet to be deeply explored, yet this much is certain: Rome guys are naturally shaggier than our boys back home, yet at the same time keener on shaving, waxing and depilation. Eyebrow shaping, beard trimming, and the occasional chest depilation transcend socio-economic and sexual-preference boundaries. They’re common practice. If that weren’t enough to confuse a girl, factor in the brighter, tighter-fitting clothing, endless grooming in front of the mirror, and the gel.

To freshly-arrived females, Rome men can bear a striking resemblance to those darling homosexuals who — for all their fun and friendship — are strictly off limits in the romance department.

Julia’s first words to Luigi were hardly private. She spoke to 50 or so young men and a sprinkling of women — those brave enough to battle the boys for a place inside Italy’s airport towers. The final phase of Italian Air Traffic Control certification requires a working knowledge of English, and close-to-perfect pronunciation of ATC linguaggio. Julia, a blue-eyed, black-haired Irish girl standing at just over five-feet, took the microphone and weighed in with “Top of the morning to you!”

As a good Catholic girl, shagging students wasn’t the first thing on her mind, but she had to admit, the view was divine.

In the first few months her class sped through salutations, past and present tenses, and likes and dislikes. Luigi kept his likes to himself, citing soccer and travel as his favorite hobbies. Fashion and Julia would later emerge as dueling passions.

As winter approached, students bundled up for the cold, and in most cases took the opportunity to flaunt the season’s latest styles. Julia held fast to her open-toed shoes, purple toenails glittering beneath the straps of black sandals. Luigi, himself quite sensitive to dips in temperature (as well as the latest in Armani outerwear), would later admit that it was the painted toenails that first drove him crazy. That and her smile — which tipped ever so slightly down to the left revealing a front tooth.

By the end of the semester, he would grin through lessons — his glee safely masked by designer wool-cashmere blend. At their school Christmas dinner, they sat at opposite ends of the table, Luigi watching as the class clowns, class nerds, and class flirts took their turns with her, leaving her little time to eat, yet enough time to turn Chianti-colored to match her glass.

When a group of students organized a night out dancing, Luigi vowed to make his move. He cut and styled his hair, shaved off the five-o-clock shadow (though he knew it would leave him with weeks of itchy, red razor burn), and donned his favorite pair of cherry red pants.

Julia also dressed up. She did her eyes, and donned a 1970s-style vintage leather belt in electric blue over her slightly-tighter-than-teaching black pants. Over the past few months, she had developed a few crushes herself. With a lengthy winter break on the horizon, it was the best — if only — time to bring them to fruition.

Following hurried holiday greetings and kisses to cold cheeks, students and teacher poured into the welcome warmth of a central music bar and disco, where the deejay was mixing old school hip hop and the pop hits from the 80s and 90s. Luigi could feel the rhythm creeping under his skin, and working itself throughout his body, but he resisted the urge to dance just yet, and vowed to buy Julia a drink before hitting the floor. She stood at the center of the crowd at the bar, her face aglow with the first round of shots and male attention. Her shoulders rose and fell in time to the music, and as she glanced around, she caught Luigi’s glance and shot him a toothy smile.

As the base line burst into a remix of Michael Jackson’s “Billy Jean,” he slid into action, head bobbing side to side, hips in subtle swing mode, he made straight for her, playfully gyrating his lower half to nudge classmates out of the way. He shimmied up to the bar — facilitated by rapid-fire repetitions of Billy Jean is not my lover, and grabbed her hand, pulling her to the dance floor.

She took in his ensemble — head-to-toe red and maroon — and his unabashed dance moves, and in an instant of culturally-formed sexual stereotyping, discounted any prospect of romance between them. She bent at the knees, swiveled her hips, pursed her lips, and threw scruples to the wind.

Three dates later, they were a couple, sneaking secret kisses between the subjunctive and the superlative. Five years later they bought a place, and they’ve never been happier.