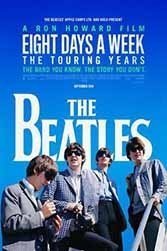 Ron Howard’s seamless Beatles documentary has the great virtue of concentration. Using exceptional archival footage it reconstructs the band’s early rise from the obscure Liverpool club scene (1962) to become the most influential touring groups in the history of music (1966). Howard has little interest in squabbles, individual fame or later tragedies. Instead, he uses vintage interviews to make sense of how John Lennon, Paul McCartney, George Harrison and Ringo Starr came to control the fate of pop music.

Gone once and for all is the notion that The Beatles were little more than a studio band that fell apart in concert, a notion shopped around after the band stopped touring in the mid-1960s. Howard’s picture is of a skilled quartet that ultimately ran itself ragged, overwhelmed and ultimately undone by the demands of public expectation.

He inserts charming footage of Whoopi Goldberg and Sigourney Weaver recalling their own tidbits of early Beatlemania. He lets American reporter Harry Kane, who though only 21 accompanied and the band on its 1964 American tour, play storyteller and moral compass. There’s also Eddie Izzard and Elvis Costello, each one chiming in with Beatles insight gleaned from their youth. Producer George Martin and upscale manager Brian Epstein, though barely interviewed, are in the foreground thanks to praise from the band itself. The early and haphazard recording process is lovingly recreated to give a sense of how now-famous melodies actually came together. By the time Howard gets around to the band’s much mocked second film, “Help!” he’s able to make it clear the man making that cry was Lennon.

Howard’s refusal to let his story stray inch past 1970, when The Beatles played for the last time on a London rooftop, is a tribute to a director who, while clearly treasuring the band, is determined above all to elicit a passionate slice of the early and mid-1960s, and he does so with class.