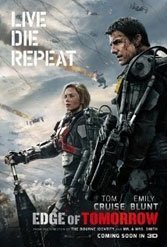 Repeatedly hitting the reset button rarely works in blockbusters. Who wants to see the same scene rehashed? It’s a high-risk strategy, particularly if you’re on the Earth-vs.-Aliens express bus. But Christopher McQuarrie has devised a script that’s ingenious enough to neutralize most skepticism (in fairness, McQuarrie inherited work by brothers Jez and John-Henry Butterworth and a host of others).

Tom Cruise is Major William Cage, a PR wizard who’s good at selling Allied victories (in this case over octopus-tumbleweed invaders known as Mimica) but couldn’t be less interested in the fighting. Asked to “cover” a landing (“Operation Downfall”) intended to re-conquer occupied France (shades of Normandy), he respectfully declines. That doesn’t work out and suddenly he’s branded a deserter and thrown into the thick of a beachhead apocalypse. Seems the mean Mimics knew the invasion was coming. But wait. The instant he dies, Cage wakes from his nightmare, is returned to the pre-invasion, and find himself locked in a loop. Each time, though, our hero acquires a bit more wit, and increasing doses of moxie. He begins to figure out why he’s being constantly resurrected, which not surprisingly includes stunning female warrior Sgt. Rita Vrataski (Emily Blount) known as the “Angel of Verdun” (yes, World War I is also drafted). Our dead major, infected by all-knowing alien blood, is now the warden of time itself. As long as he’s willing to die another day, he’ll continue picking up tips on the enemy mind.

Though everything about the digital sci-fi battlefields, robotic combat suits, and slow-burning boy-girl ties (reformed coward and Go Girl Angel) are predictable enough, director Doug Liman and his writers jar conventional premises just enough to give their reset premise some punch. Cruise is allowed to return to his boyish, mischievous ways, when he’s at his most engaging. Based on Japanese writer Hiroshi Sakurazaka’s 2004 sci-fi novel “All You Need is Kill.”