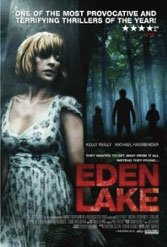 In writer-director James Watkins’ vicious but formulaic gore-fest, Jenny (Kelly Reilly) and Steve (Michael Fassbender) is a young London couple headed for a romantic camping weekend beside a lake near a little-known quarry in the British Midlands. “At the first opportunity, turn around,” their prescient navigator advises them monochromatically, and they laugh. But in stories such as these computer tip-offs are a harbinger. In the woods lurk an infinitely sadistic and homicidal cluster of teens, Droogies on bikes, and so begins the clash between young urban civilians and hormonally charged rural barbarians.

The rest is a gruesome cat-and-mouse game that demonstrates — surprise, surprise — that brutality courses in everyone’s veins and a girlfriend’s wrath is nothing to treat lightly. All it takes is a nudge in extinction’s direction and a few leaking organs.

Watkins inflicts relentless visual pain, but to what end remains something of a mystery since he hits the same nail time and again, never shedding much light on how his nihilistic barbarians came around to their blood lust. Reilly admittedly puts on quite a display in transforming herself from abused to avenger, prey to predator, but the story’s deck is stacked from the start. If only it ended in the woods, which is doesn’t, making happy escapes the stuff of some other galaxy.

Jack O’Connell (then 17) is the lead thug, and a convincing one, setting himself up to go a brilliant step further in the 2012 “Starred,” a prison drama that gave his ability to transmit malevolence a sense of context and logic.