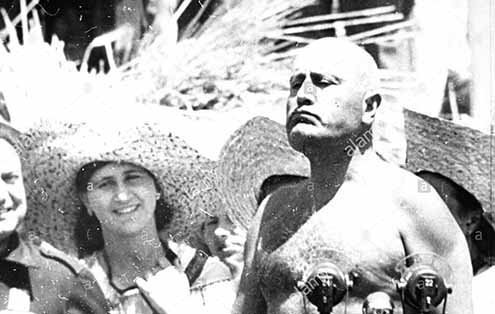 Benito Mussolini was proud of his physique, making it a component of ideology.
T

Renowned as a philologist, philosopher and novelist, Eco, who died in 2016, was also a lucidly intuitive thinker. His 1995 observations, written about the time the far right began returning to vogue in both Austria and Italy, retain their incisive force.

Acknowledging Karl Marx’s enduring appeal, Eco asks, “Is there still another ghost stalking Europe (not to speak of other points in the world)?” Yes, he replies emphatically.

His essay began as a lecture to Columbia University students, inspired in part by the April 1995 destruction of the Murrah Federal Building in Oklahoma City, which killed 168 people. Period headlines called it an act of domestic terrorism, identifying the perpetrators as homegrown, extreme right-wingers. Gulf War veteran Timothy McVeigh, a radical anti-government activist, was convicted and executed for carrying out the attack. His accomplice is serving life without parole.

Putin, who came to power in 1999, deliberately cut from the same mold.

For Eco, the event was part of a totalitarian trend that would soon manifest itself more openly. But the new fascists would not be clad in Nazi or Black Shirt garb. Old language, slogans, and dress would be set aside, replaced by authoritarian sympathizers making their case in neat civilian suits.

Despite this new look, fascism would still possess telltale markers. “Ur-Fascism,” Eco wrote, “is based on a selective populism… in which individual power is delegated to a leader who pretends he is simply obeying his people’s every thought and desire.” Real power shifts from the individual citizen to the leader. “There is in our future a TV or internet populism in which… a selected group of citizens can be presented as forces of unlimited power… ordered by The Voice of the People.”

When Eco referred to the possibility of cyberspace populism, the web was still in its childhood. The Yahoo search engine first appeared in 1995 as part of a burgeoning new world of communication and information flow. There were few Eco-like figures to imagine Facebook and its vast reach.

How then to recognize these new totalitarians without swastikas or black shirts? This is where Eco introduced his 14 traits, any combination of which he suggested might help unmask a new-age fascist. Eco doesn’t lack for wit, or a remarkable sense of the prophetic. He notes that photos of Mussolini as bare-chested horseback rider “had a more lasting, global fashion influence than any Armani or Versace.” Europe’s self-styled macho leader is Russia’s Vladimir Putin, hardly a democrat. Donald Trump’s now marginalized strategist repeatedly defined Trumpism as “nationalist populism.”

In his introduction, Eco painfully recalls a childhood growing up under Italian Fascism, a time when domestic brainwashing extended into the school system. When he was 10 he wrote a school essay on the assigned theme, “Should we die for the glory of Mussolini and the immortal destiny of Italy?” Naturally, he answered “yes” and was awarded a prize.

He also recalls Mussolini’s deposing in 1943, and with it his enormous surprise at discovering many countries had more than one political party. After that came the shock of the Allied invasion, with British and American troops sweeping north. GIs brought comic books and chocolates, failing to fulfill the monster image Mussolini’s oratory had promised. Soon, the free press began revealing the horrors of Auschwitz. “The Voice of the People” had been a tissue of lies, and repressive orders. “They” must never return, writes Eco.

“Eternal Fascism” is a brilliant, disturbing, and necessary reminder of how unprepared we often seem to be as history strives to repeat itself.