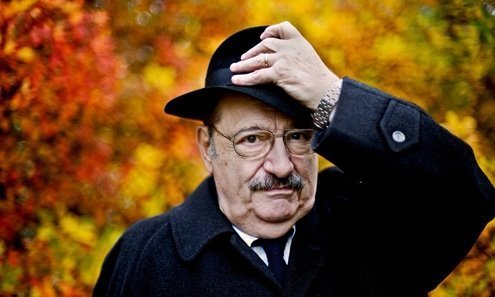 Novelist, critic and philosopher Eco died in February 2016 at age 84.
I

talian philosopher and writer Umberto Eco died in February 2016 at age 84, leaving behind a rich legacy of words and ideas. He unzipped linguistic interpretation in semiotic texts. He did much the same in seven fictions, though more playfully. His final novel, “Numero Zero” (Harvill Secker, London: 2015) follows in that playful vein, using the story of a fledgling Milan newssheet to spoof the Italy’s less than serious media (a numero zero, or zero issue, is a dummy issue of a newspaper, the mock-up of what it might eventually look like).

Set in1992, during Italy’s hot era of “Mani Puliti” (Clean Hands) — the widespread judiciary investigation of political and business bribes that led to the collapse of the country’s largest political party, the Christian Democrats — Eco takes things a step further by adding post-World War II intrigues. Over all, it’s too elaborate a satire for “Zero’s” slim pages, but the novel uses these mysteries (and a love story) to forge ahead.

Hired by managing director Simei as his assistant, hack journalist Colonna narrates the few months his employment as the staff prepares 12 issues of a scandal-insinuating newspaper to be called Domani (tomorrow) yesterday”). Colonna’s job is to chronicle the birth of the paper and Simei’s role in a book called “Domani: ieri” (Tomorrow, yesterday). The dummy issues, never mind the book, are not intended to see the light of day. They’re just blackmail tools in the making.

Only Colonna and Simei know the no-publication deal that’s been set up by their shady financer, Commendatore Vimercate, who’s convinced the articles printed in the dummy copies will give him menacing leverage: on the elite Roman society that snubs him, and the Clean Hands judiciary that hunts him in the court room.

Descriptions of him as entrepreneur and sometime Italian prime minister clearly suggests media magnate Silvio Berlusconi, who rose to power in 1992. But Eco has more in mind than Berlusconi bashing. Through allusions and word games, Eco bitterly mocks media abuses, and Italy’s long history of conspiracies, secrets and lies.

“Zero” signifies both no content and that “nothing” has yet to be made public, and never will be. Staff surnames are a gag. Braggadaccio loudly brags about his keen nose for scandal. “Colonna” is Italian for “column,” a reliable editorial moniker for a hack who’s previously dabbled in obits, puzzles, and gossip.

Rephrasing old news articles into shocking revelations is a painstaking job. Deliriously unprepared, Simei’s writers are ripe for Simei’s first and only appearance before his staff. There he offers an instructive chat on Domani’s goal: to deform interpretation.

Simei explains how to get readers to swallow a “refurbishing” of what they’ve already read about in other, real newspapers. Why not invent a train crash eye-witness who contradicts the official version of the accident? Put what you claim he said in quotations marks. Quotes — still sprinkled liberally throughout Italian media — promise authenticity, even truth. If only they bore any resemblance to what was said, which often they do not in either fact or fiction.

Simei’s advice: “It’s not the news that make a newspaper, but a newspaper that makes the news.” A number of incidents of petty thievery in different Italian cities can be stitched together in one report so the reader thinks you’ve uncovered a terrifying national crime wave.

Never forget, he adds: we’re aiming at an audience of honest middle class people. So keep it straight and simple; no talking down to them. And forget fancy words like palingenesis.

Maybe Braggadoccio didn’t know that palingenesis is Latin for a kind of re-birth, and was used by Cicero to describe his return to Rome from political exile. Or maybe he wasn’t listening carefully. Because the palingenesis of Italian dictator Benito Mussolini remains Brag’s obsession.

He tells anybody who’ll listen about the scoop he’s researching: that the Fascist leader didn’t die; his stand-in did. The real Mussolini’s been hidden away by the Vatican. Colonna listens patiently; talking over story proposals is his job. The only perk so far lies in his deepening relationship with Maia, Domani’s sole female writer. But while Maia’s turning out to be more intelligent, and romantic than he imagined, Braggadoccio gets more ridiculous every week.

Hasn’t Colonna heard all the postwar plot and conspiracy theories before? Doesn’t everybody already know about the Allied stay-behinds, those CIA grunts and moles imbedded in Italian society for decades? All the intrigue is manufactured to prevent a hysteria-bred fear of Communist Party political takeover (something Berlusconi also played and preyed on). But Braggadaccio babbles on: the “real” Mussolini, now in his late 90s, will soon appear on television, inspiration and support for a right-wing government coup. Yawn.

Yet just two months into into his job, Colonna wakes up one morning to read a real newspaper report that succinctly notes Braggadaccio’s death. Allegedly sleuthing around in a dangerous and prostitute-rich area of Milan, the reporter was slashed to death.

When Colonna gets to the office he meets Simei, who’s shutting it all down. The Commendatore got a mysterious late night phone call and dumped Domani. Simei’s going to Switzerland, and fast. There are, it seems, grave limits to interpretation.

Did we say that “Zero” also builds on a romantic plot? Yes, we did. And Eco’s growing revelation of a tender love story between Colonna and Maia palatably sweetens this comic, caustic satire.