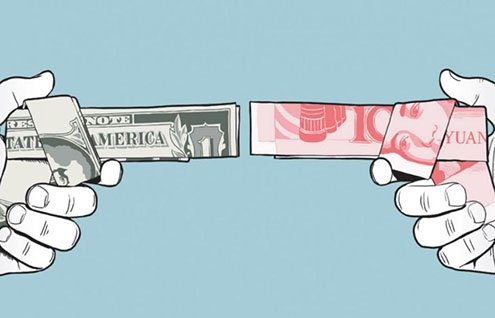 The trump administration's $60 billion worth of tariffs on China is a game-changer.
R

ecent moves by President Donald Trump on tariffs and trade have put economic issues at the center of foreign policy. For a leader who exalted raw military power during his campaign, “bombing the [expletive] out of ISIS” among his promises, Trump has shown great interest in wielding the economic tools of geopolitics. The administration’s decision to slap $60 billion in tariffs to punish China for unfair trade practices was blunt.

Additionally, Trump nixed the takeover of U.S. chipmaker Qualcomm by its competitor, Singapore-based Broadcom, because it would “impair the national security of the United States.” Meanwhile, Congressional Republicans are pondering legislation that would overhaul the rules governing the Committee on Foreign Investment in the United States (CFIUS), the interagency committee that reviews foreign investments in strategic U.S. sectors.

The importance of economics in geopolitics is not new. The United States was notorious for its “dollar diplomacy” at the start of the 20th century. After World War I, and even more so following World War II, the United States created global economic institutions and norms that consolidated its geopolitical power. To this day, the U.S. dollar’s role as the global reserve currency allows the United States to impose sanctions and also ensures their globe-spanning reach. Similarly, the country’s influential role in multilateral institutions such as the World Bank allows Washington to support not just international development but U.S. goals as well.

Yes, great powers have always used economics to further their foreign policy agendas. And yes, the Trump administration is indeed becoming more comfortable in broadening the set of economic tools it is willing to use. Yet, even this increased willingness pales in comparison to the potential economic tools the U.S. could potentially employ to push back against its major geopolitical competitors.

The fate of Sergei Skripal and his daughter in the United Kingdom shows the possibilities for integrating new economic tools into foreign policy. Since Skripal and his daughter were poisoned, allegedly by Russia agents, in early March, the British government and allies have expelled Russian diplomats and closed diplomatic facilities. There are, however, a variety of additional measures that UK leadership could take.

The potential measures would retaliate against Moscow by attacking the Russian wealth that has found a home in London. According to Tom Keatinge of the Royal United Services Institute, a British think tank, decades of light regulation enabled the influx of Russian capital into London through asset sales, private banking services, and stock exchange listings for Russian companies. Along the way, this same light touch also allowed illicit Russian funds to course through the British financial system. This mix of clean and unclean money has limited the options available to policymakers trying to push back against Russia.

Though the time for the most effective action on illicit Russian money has passed, Keatinge insists the British government still has means of putting the squeeze on bad players. It could, for example, increase resources for the National Crime Agency and establish better policies on ownership registrations that would shed light on who owns what, a key component in reducing the influence of shadowy players. Measures such as these would help conjoin domestic policy — the focus on creating more open and cleaner financial markets —and foreign policy goals.

Trump has tied his fortunes to economic sturm und drang.

In the U.S., measures to increase transparency could also help in competition with Russia. As various experts have argued, the story of Russian interference in the 2016 election is, in part, one of unchecked money entering the U.S. and distorting its politics. In response to the revelations of the shady lobbying activities of former Trump campaign chair Paul Manafort, there has been a greater focus on cleaning up the murky norms and regulations around Washington lobbying and the representation of foreign governments. Greater focus on ownership registration would, as in Great Britain, create greater transparency and reduce the likelihood of illicit capital affecting U.S. civil society and politics.

U.S. officials have long known that promoting economic transparency could further foreign policy goals. In 2005, the Treasury Department declared the Macao-based Banco Delta Asia a “primary money laundering concern.” The designation led to a financial chain reaction and the eventual freezing of assets held by North Korean leadership. Most importantly, this measure gave the U.S. leverage in the then-ongoing negotiations to resolve the nuclear issue. Back then, the measure seemed like an offensive one, more akin to sanctions than a simple move to ensure financial integrity. Now, as in the Skripal case, countries can see that they can weaponize domestic economic regulations for foreign policy goals, too.

As long as policymakers broaden their toolset, the possibilities for employing economic measures will keep growing. Writing in The American Interest, Jonathan Ward argued that to compete with the China, the United States would have to enlist the support of private businesses. If major companies view their interests as out of line with U.S. policy, Washington will lag. “The same way that carrier groups and other military forces are primary assets in U.S. hard power,” he concluded, “America’s companies and businesses, both public and privately held, are the main actors in our economic future.” The economic options facing U.S. policymakers seem less and less limited by the day. They just need to think of how to use them.